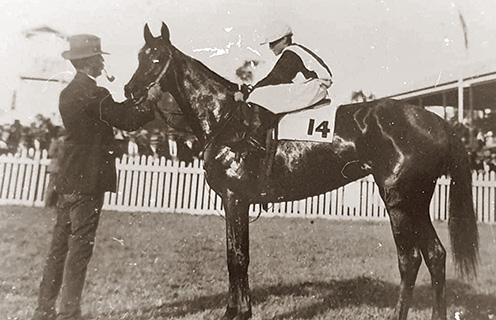 It wouldn’t surprise if members and friends of Springsure’s McIver clan and those of Rockhampton’s Mike Henderson’s singalong to Cher’s “If I Could Turn Back Time” at Callaghan Park on Rockhampton Cup Day.

That’s because about 60 of them will amass there to celebrate the 100th anniversary of Lady Louka’s time immortal win in the 1922 rendition of the Rockhampton Cup.

They will include direct descendants of Lady Louka’s owner-breeder William McIver from Lake Dunn north of Aramac and her trainer George Leyburn from Barcaldine.

Appropriately the large group will be dressed in black and white the colours of the silks that Lady Louka’s 13years old jockey Lindsay Marshall donned on that memorable day on Monday, June 19.

“So much research and planning has gone into both tracking down the true facts of the Lady Louka story as well as tracing the descendants of the families involved. We are indebted to John Day the Rockhampton racing historian for his time and commitment in assisting”, organiser Rockhampton’s Mike Henderson said.

Mike is the grandson of trainer George Leyburn a name changed from his birth record of George Rose coming about from his time attending horses with a circus after arriving from Leyburn.

“He was very good with horses so anyhow his fellow circus workers called him George from Leyburn and he liked it so much he changed his name”, Henderson explained.

So, history, so rightly described as a chronological record of important events records that George Leyburn trained Lady Louka the 33/1 chance to win that memorable Rockhampton Cup.

Indeed the 1922 version was both important and noteworthy being the first 1000 pounds race staged in Rockhampton since the advent of racing in this city in 1868.

Carrying the featherweight of just 6 stone seven pounds (42.5kg) school boy Marshall had her sitting second in the running before going for home in the straight at Callaghan Park.

The young lad would have been as proud as punch as the 1922 Cup field attracted senior jockeys from Victoria, NSW and from throughout Queensland.

The boy had bragging rights for life!

It is recorded that owner William McIver won handsomely on Lady Louka whom he bred by mating his mare Louka with Flying Machine a stallion based at Bexley Station, Longreach.

As much as 100/1 was bet against Lady Louka, a previous start Foy Cup winner under 11 stone two pounds (70.5kg), a race restricted to grass eaters at Aramac before her 390 miles (640km) journey to destiny.

It only goes to prove that to this day thoroughbreds “grow another leg” when fed on grain-based feed.

The year 1922 carried special significance for Callaghan Park racing as the last hurdle race was run there that year being won by Les Smith’s Golden Vanity over 17 furlongs (3400m).

That same year historian John Day believes a world record could have been recorded there when Bay Hart and Sir Ross dead-heated in a race and also in two subsequent deciders.

It occurred on Saturday September 9, 1922 with all races run in succession.

As Cher would say “If I could turn back time” something the McIver’s and Henderson’s and their entourages will reminisce as they toast the Lady Louka crew on the very same racecourse 100 years later on Saturday.

The Rockhampton Jockey Club wishes them an anniversary to long remember.