A picture paints a thousand words 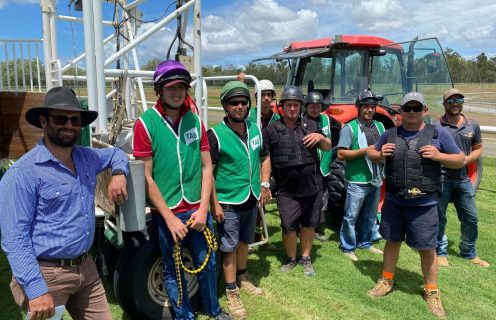 If ever a picture painted a thousand words it is the accompanying one depicting barrier attendants loading a troublesome horse into the gates at Ridgelands racecourse in October, 1991.

The horse in question was the late Geoff Webster trained Cabaret King (aka Wobbly Boot) and the encouraging jockey is Michael Evans now a Rockhampton trainer. Michael related recently that Wobbly Boot had a trait of trying to sit down on his hind legs rather than go into the barriers conventionally. Hence the barrier crew, in this case including Reg Smith, a Ridgelands Race Club committeeman (on the right) had to man handle Wobbly into the barriers aided by an attached rope. Note the dress, hats and footwear of the volunteer barrier men who went about their arduous and dangerous work without virtually any protective gear what so ever.

It was a scene repeated at racecourses Australia wide on race days and not just in the country but all that changed in more recent years.

In 2017 it became compulsory for barrier attendants at Queensland race meetings (including country) to wear safety vests and skull caps.

Much earlier, safety vests became compulsory for jockeys to wear in races and trials as far back as December, 1998.

How things have changed.

PICTURE 1: This is how it was at country tracks throughout Australia as a defiant Cabaret King objects to being loaded into the barriers before the Class B (1250m) at Ridgelands racecourse on October 7, 1991. Incidentally, the horse finished fourth of five to Scenic Lad.

HOOFNOTE: The Ridgelands culprit Cabaret King (aka Wobbly Boot) was cleverly named being sired by Brighlights from the mare Beer and Biscuits.

Brightlights was fathered by Showoff 11 (by Whistler) from Song and Dance.

Hence the clever title of Cabaret King or preferably to his connections Wobbly Boot.

The accompanying story I wrote in The Morning Bulletin on November 25, 1992 tells the tale.