Big day out for Taylor – Article BY Tony McMahon 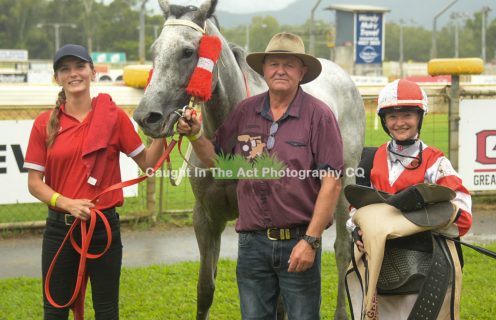 I have often heard it said that you can take the boy out of Rocky but not Rocky out of the boy.

It’s almost a sure bet that Taylor goes home with at least one winner when he regularly treks the 540km route north to race his horses at Callaghan Park, Rockhampton.

Originally from Charters Towers but now based at Peaks Crossing, Cleary’s “Bold” horses are becoming prolific in Queensland along similar lines to their predecessors the “Craiglea” horses.

“Graham usually has between 15 to 20 horses in work with me at Corbould Park racecourse. I have up to as many as 38 horses in training and also have a farm with 25 spacious yards about six minutes’ drive out from the racecourse which we use for them as well”, Taylor said.

Asked about the significance of the “Bold insignia”, Garnett said he didn’t really know the reasoning.

“For memory the first horse I had for Graham was Bold Dictator and that was many years ago”, he said.

In fact, it was 2012 and Bold Dictator a son of Zariz won his Maiden at Callaghan Park.

By coincidence, Bold and Lucy the home-bred runaway 3.75 lengths winner of Thursday’s $20K Class 1 (1200m) was sired by Bold Attraction which is also a son of Zariz.

‘’Bold Attraction was a very good horse and was a full brother to Bold Assassin” Garnett related boldly.

It is not the first time by any means that Garnett Taylor, who had the best winning strike rate at Callaghan Park last season, has prepared three winners there in a day.

“I remember my daughter Alisha rode three winners for me there one day”, he recalled.

Stable patron Graham Cleary is in a rather unique form of the building industry.

The camps in many ways resemble townships and can house hundreds upon hundreds of mine construction and coal mining workers.

The former champion Brisbane apprentice jockey Button has been a real shaker and mover since entering the training ranks (2009) from which he has enjoyed outstanding success.

Button left Rockhampton in 2019 and splits his stable between the Sunshine Coast and Townsville.

“I have 20 in work at the Sunshine Coast and 12 in Townsville. From Townsville it is only four hours to both Cairns and Mackay. By having both those stables strategically placed, I can target every QRIS bonus race anywhere really in Queensland. It is working out well. That way I can try and pick and choose between the races and horses”, Button explained.

Button is a strong advocate for the QRIS bonus races for the young horses and the stable buys big at the Gold Coast and Rockhampton Yearling Sales each year.

After having to be hospitalised and incapacitated for some months last year after multiple knee replacement surgery, Garnett Taylor missed the sales and said he was low on 2YO’s this season.

The commonality that both Taylor and Button share is the ability to “place” their horses astutely.

Placement in horse racing is the vital ingredient to success – in fact it is the name of the game.