Big Miles on the Road for Clinton Taylor: with Tony McMahon 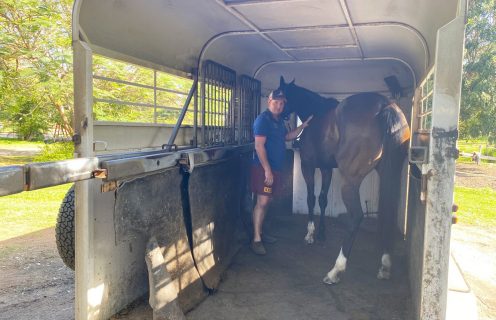 From a lifetime engagement in horse racing, I have always been an advocate of the philosophy that “nothing ceases to amaze me” but believe me I am starting to have my doubts about that.

Quite frankly the racing exploits of Rockhampton racing’s latest premiership winning trainer Clinton Taylor, 37 during the 2021/22 racing season have me scratching my old bald head.

Not so much the fact that Taylor trained 54 winners for the season nor that he got the gong for top scoring with 20 at Callaghan Park but more so to what lengths he went to achieving those feats.

Therein lies the story so after hours of navigating my computer search engines I mapped out and retraced the float trips that took Clinton and his trusty older model Toyota Prado and his horses to 17 individual racecourses last season.

This revealed that between August 1, 2021 and last Saturday, July 31, 2022 Taylor had made an amazing 69 individual float trips to and from race meetings with his horses.

Sure, it is only the proverbial stones throw from his main stable base in Bernard Street, North Rockhampton to Callaghan Park racecourse where the team raced at 23 race meetings.

Now here’s where it gets interesting and where I got tired just collating the intense figures.

Mind you I was seated behind a computer whereas Clinton would have been in the driver’s seat clocking up crazy kilometres while trucking horses all over the state.

In fact, he made 46 trips to outside race meetings during that 12-month period as far north as Townsville and south down to the Gold Coast.

Here is just a sample menu for you to peruse.

Clinton in the main, as solo occupant trekked his horses to 10 Townsville race meetings at a round trip of 1440km totalling 14,000.

On nearly all those 10 excursions, he would load the horses after they recovered from their races and turn around and drive the eight hours plus during the night to get back to ride trackwork at Callaghan Park the next morning.

His most regular journey on the Bruce Highway was the 672km round trip up to Mackay Turf Club race meetings which Clinton made 15 times last season amounting to 10,080kms.

Then there were three float hauls from Rocky to Brisbane (3786km); two to Clifford Park, Toowoomba (2560km), plus others to Bowen, Dalby, Moranbah, Gympie, Kilcoy and Wondai.

On and on it went as the Taylor team kept on floating while I was tiring just doing the additions in my head.

Disclosure, I was a failure at maths but from checking and rechecking I made it that Clinton clocked-up 77,998km in his away from home float trips alone.

When I put that figure to him today (Friday, August 5) he said through a chuckle “that’s not bad is it”?

“Do you know”, he said “Tone this will be the first weekend I haven’t been racing horses somewhere or other for longer than I can remember”,

I should have taken Clinton at his word but I couldn’t help myself and had to check.

Sure, enough he was correct as over the last 11 Saturdays he has raced horses at Middlemount, Emerald, Gympie, Doomben, Toowoomba, Gladstone, Rockhampton, Townsville, Bowen, Mackay and Emerald.

It is likely to be a “one only” weekend off for Clinton who can enjoy family time with wife Erin the second in command at Taylor Racing and daughters Charlie 9 and Molly 6.

“It all cranks up again on Monday when I go to Emerald (4 starters) and Mackay on Tuesday with two, then next weekend I have one going to Toowoomba”, he said.

Asked how he coped with the endless drives which are unmatched by a Rockhampton based trainer, Clinton smiled while I yawned at the very thought.

“The driving during the day and night doesn’t bother me. I play CDs and listen to the music and radio and just hum along with it. I’ve always been used to long drives as when we were living at Condamine, I was always on the road taking kids to school the 25km back and forth to Meandarra and all over the place”, he explained.

The thought did go through my mind than Clinton Taylor was sure to be a fan of the Willie Nelson’s Classic of 1980 of On The Road Again but that song was a hit before Clinton was born.

Seriously, since Clinton arrived in Rockhampton just after Christmas 2018 and winning with his first Rockhampton starter with aptly named Cash Strapped on February 17, 2019 he has not looked back.

“It was tough at first but I am proud of Erin and my team as we dug in and have had wonderful owners and jockeys, everyone supporting us’’, he said

From 32 winners in the 2020/21 season to 54 last season whereby C. Taylor was placed fifth on the Queensland provincial premiership, the training journey is making serious inroads and taking Taylor Racing places.

Safe travels Clinton and with 25 horses in training and another 15 pre-training your winning ride seems destined to continue.

One last think though, if ever you need a co-driver leave me out as I now need a grandpa sleep after just penning your tale.