Callaghan Park, The Home Of Change 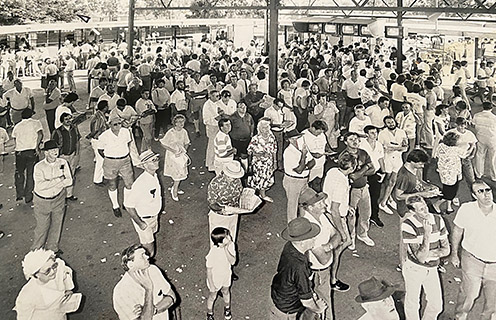 How true – “nothing stays the same forever” – which is a roundabout definition of the word change.

Take for example Callaghan Park racecourse that has undergone a myriad of changes since its first race meeting way back in June 1898.

It was the hub of gambling on horse racing every Saturday in Rockhampton being a hive of activity crammed with punters and circled by a ring of bookmakers. “I remember 34 bookmakers fielding there on Rockhampton Cup Day in 1975 about the time when I started off working there”, bookmaker Vince Aspinall recalled on Tuesday.

As an aside, the 1975 Rocky Cup (2000m) was won Jungle Hunter ridden by Brisbane’s Graham Ireland thereby completing a unique double after winning the Newmarket (1300m) under Viv Welburn earlier in the week. Of course, that was on the old Callaghan Park sand track and that changed too with the opening of the grass track before a crowd of 4764 in September, 1984.

Just a few weeks ago Vince Aspinall, who over the ensuing decades had risen to be one of Queensland’s biggest bookies was one of just four bagmen fielding at the 2022 Rockhampton Cup meeting at Callaghan Park.

The same covered (enclosed) Callaghan Park betting ring structure with its asphalt floor is now the venue for feature race day luncheons from where partying patrons if they so desire can bet off course through their mobile phones.

Telephone betting with TAB’s and corporate off course bookmakers is now the norm. Rockhampton racing had changed forever on a Friday in June 1994 with the first full TAB “midweek” race meeting which gradually sounded the death knell of weekly Saturday races at Callaghan Park.

In times gone by, off course bookmakers – SP’s (Starting Price) were deemed by race clubs including the RJC as a scourge to racing as they were freeloaders and did not contribute to racing’s coffers. They took vital betting turnover away from on course bookmakers who were taxed and thereby helped fund the racing industry.

I’m not for a moment suggesting it ever occurred in Rockhampton but it was known elsewhere some registered bookmakers had an “each way bet” working on course and running off course SP joints as well. There’s that word again “change” as betting with corporate off course bookmakers and TAB’s is now the life blood of the racing industry and a huge depositor to Government funds.

Aspinall can remember towards the end of the halcyon years of on-course bookmakers in Queensland back on Melbourne Cup Day 2005 having $1M turnover (mainly credit bets) when fielding at Eagle Farm.

“These days at Callaghan Park midweek meetings I struggle to hold just a few thousand. Probably about $2000.  Myself and one or two others stand-up (field) in The Members just to provide a service for the club and the patrons. It’s all changed”, he said.

Indeed so and while old timers and nostalgics lament, the tail to this yarn reads the same as how it commenced “nothing stays the same forever”. While it may be difficult to envisage it’s a sure bet somewhere down the track it will all change again!

Just the same as it did in 2008 when the High Court of Australia ruled that corporate bookmakers in their safe haven of the Northern Territory could expand their business virtually Australia wide. Now that was some change,