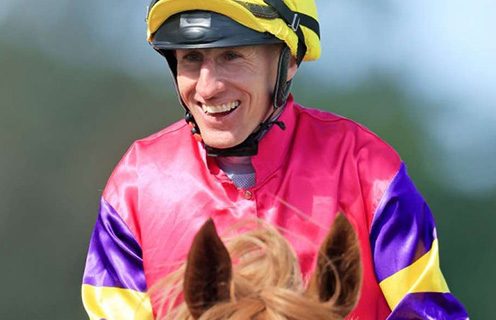 Pike with an amazing tally of 2940 winners alongside his name heads a star-studded line-up of jockeys, trainers and horses all vying to for a share of almost $400K prize money on offer.

Between them those eight jockeys have ridden an amazing 14,958 winners.

Pike has seven rides on Friday including five for leading Brisbane trainer Tony Gollan who will start seven horses among them three in the $100K Latter Kennedy Newmarket (1300m).

Despite the weight in numbers on Gollan’s side he has gone on record as saying “The locals are always hard to beat in Rocky”.

Speaking of which only two such horses will run in the Newmarket being Adrian Coome’s Plenty (TAB 8 -Mark Du Plessis) and Jared Wehlow’s Only Wanna Sing (TAB 6 – Nathan Day).

Desert Lord signalled his legitimacy for a Newmarket winning attempt when second in the $200K Eye Liner Stakes (1350M at Ipswich on June 18.

With a BM rating off 99, Desert Lord is the highest rated Newmarket contender but he faces a 4kg weight hike.

Jim Byrne’s mount Sir Capewell, a winner on The Archer program at Callaghan Park in May was close-up behind Desert Lord when third in the Eye Liner and meets him 3kg better at the weights.

Gold Coast father and son training team of Toby and Trent Edmonds have been true to their word about “bringing a truck load of horses to Rockhampton” having six starters on Friday.

All their runners are well credentialled with riding engagements shared by Noel Callow and Robbie Fraad.

About a month back when alerted to the $20K bonus on offer for the most successful trainer over the Newmarket and Rockhampton Cup meetings, both the Edmonds and Gollan stable pledged their support.

With 99 horses declared to start on Friday, it is little wonder that Rockhampton Jockey Club officials are delighted.

“The great fields of both quality and quantity on top of the Government’s announcement here on Tuesday of a $2.3M grant for flood mitigation facilities is fantastic news. This will allow for an enlarged female jockey’s room as well as that for the males and new administration offices on the second floor above their current location. This will be a huge weight of burden off the club’s shoulders as those ground floor facilities have in the past been impacted by flood waters”, RJC Chairman Rob Carr said.

There are no such worries for Friday and Saturday’s gala meetings with Callaghan Park presently under a canopy of brilliant Sunshine set to continue after heavy rain earlier this week.

Despite over 100mm being recorded, course curator Trent Williams is predicting the track will be rated a Soft 7 come Friday.