Fight In The Dog Causes Boil Over 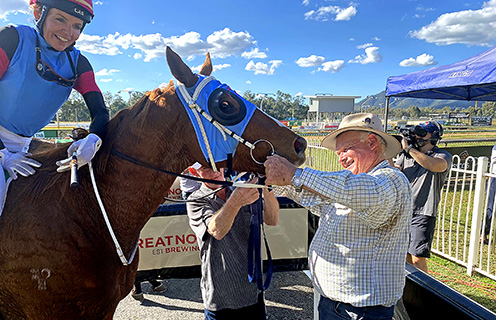 Excuse the pun as I know it is a no, no in journalism but on this occasion, I can’t help myself which leads me to “make hay while the sun shines”.

That’s exactly what part-time Taroom horse trainer and full-time cattleman Rodney Hay has been doing over the last week.

In fact, Rodney has made “more hay” during that time from his beloved horses than at any other time during the past 20 years he has dabbled at training thoroughbreds.

Mind you nobody is begrudging the likeable Rodney as he has travelled thousands upon thousands of kilometres over the years searching for wins with his small team based on his Taroom property Broadmere.

Callaghan Park racecourse Rockhampton, almost a four hours float drive from Taroom has been one of Rodney’s happy hunting grounds during that time but right now it is “number one”.

Firstly, his unusually named new found stable star Fight In The Dog (Tasha Chambers, $26.00), trained and owned by Rodney caused a boil over by winning the $20K Class 3 Plate (1050m).

Why a stable star?

“He’s won his last three in a row now after here back in May and Thangool before that. I’m happy with that”, Rodney said while RJC CEO Ian Mill invited him up to the owner’s lounge for a drink and presentation.

Stopping on the stairway, Rodney couldn’t help but express his exuberance.

“It’s been a great few days Tony. Last Saturday, Fiery Exchange who I own and Clinton Taylor trains won at Gympie. Then the same day out at Blackall races my horse No Refund (trained by David Rewald) won for me. Now this, it’s the best run I’ve had” Rodney said before Ian Mill piped in saying “now I am taking him up for a complimentary drink on the RJC”.

Little did Rodney know but if he did, he certainly wasn’t saying so, just short of two hours later his day was to get even better.

That came about when the Hay owned and Clinton Taylor trained Shaluna won the last Rocky race the $20,000 BM 55 as a $14.00 chance for jockey Justin Stanley.

During his two decades of training Rodney has chalked up 126 winners as a mentor himself.

More recently he has extended his racing arm reaching out to other trainers to assist in seeking winning golds.

Clinton Taylor, akin to Hay who travels his horses everywhere in quest of wins, is the latest and the combination has got off to a flying start.

Asked how many horses he owned, an excited Rodney said at first “I don’t really know but I train five myself back at home (Taroom)’’.

Three of those Moriconi, Coach and Galapagos will start at the Emerald races on Saturday.

So, for Rodney Hay could the week get even better?