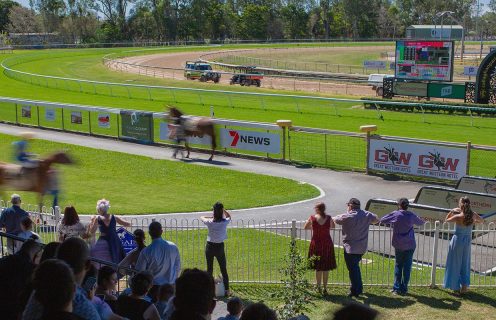 Once it was inconceivable but now it is stark reality.

Call it a plain old Merry-Go-Round or in more of a timely term a juggernaut but regardless horse racing goes on and on and on.

It wasn’t all that many decades ago that racing in Queensland was confined to Saturdays and of course Wednesdays during the week.

Then the odd days started to step in and now lone behold Sunday race meetings are a norm.

However, who would have thought that the northern provincial regional race clubs including Rockhampton in this essay along with Mackay, Townsville and Cairns would become virtually conjoined?

Afterall, it was considered brazen in June 1994 when the Rockhampton Jockey Club held its first so-called mid-week TAB race meeting – a Friday.

Convention had held the reins in Rockhampton racing since it’s inception in 1868 whereby racing was conducted of a Saturday apart from the occasional public holiday or mid-week Winter Carnival date.

The racing landscape in Rockhampton changed slowly at first and then radically after the success of that first Friday TAB race day just under 28 years ago.

In tune with the words from the song “from little things big things grow” mid-week TAB race venues are now the standard in Rockhampton and similarly in the afore mentioned northern cities.

In some ways they are akin to a show circuit where performers follow and strut their stuff.

Cairns conducted a TAB meeting last Thursday, January 6 and next day it was down to Mackay for another big TAB card on Friday, January 7.

On Saturday, January 8 the road heads north again to Townsville for TAB racing.

Then a two days respite before the Rockhampton Jockey Club chimes in at Callaghan Park with an eight race TAB program on Tuesday, January 11.

There is no shortage of entertainers either as 264 thoroughbreds were declared to chase the cash on offer at a staggering $672,000,

A number of performers – in this case jockeys will have ridden at three of those meetings while one Brisbane’s Nathan Day was booked to ride at all four.

The Rockhampton Jockey Club’s rendition on Tuesday commences at 1.34pm with the last race scheduled for 5.50pm.

The father and son combination of Rockhampton trainers Fred Smith and Tom dominate the first race on Tuesday, the QTIS 2YO Class 1 (1050m),

Both have two runners apiece with Tom Button having the lone challenger Jemeldi.

With three placings from four starts this campaign, its apparent weight has become the Graeme Green trained sprinter’s nemesis.

Green has opted for three kilograms claimer Tessa Townsend to help counter the load whereby Jamie will have to carry 62.5Kg,

It’s still a big weight for a big-hearted horse that deserves to win.