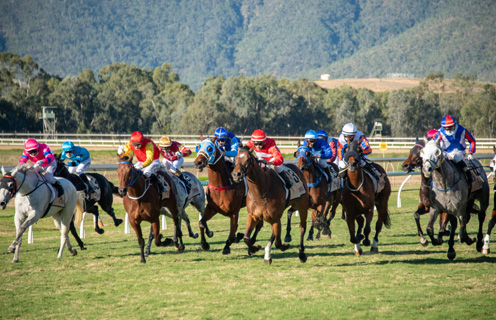 The bumper TAB eight race card at Rockhampton’s Callaghan Park racecourse on Friday has all the trademarks of a Winter Racing Carnival program.

Racing commences at the very early time of 10.50am and finishes at 2.55pm so as to align with the Sunshine Coast’s mammoth TAB nine race card which also starts early at 2.47pm and closes at 7.30pm.

For certain this will maximise betting returns while Racing Queensland obviously has other pertinent reasons for the unusual scheduling times for both centres.

Together with a swag of local, regional and country trained horses chasing victory it makes for the most completive meeting this year at Callaghan Park.

“I rated the track a Soft 7 this morning but expect it to improve to around a Soft 6 by Friday. There is plenty of sunshine out and even if we got another one or 1.5 mils it should stay that way”, Williams said.

Form assessors would no doubt be scratching their heads as they go through the fields looking for likely winners as it is that tough a meeting.

“We (Callow) go back a long way as we were apprenticed together. Noel was with my uncle Allan Douch”, Stockdale said.

Riverdale Special will be the first of the Pakenham based trainers’ team of six horses starting in Rockhampton in preparation for the Winter Racing Carnival.

A $150K purchase at the 2020 Inglis Ready To Run Sale, the Sebring gelding has started just twice for a promising fifth at Pakenham before 1.67 lengths third in heavy going over 1000 metres at Gilgandra on May 15 during the long haul north.

Stockdale believes that Riverside Special will be suited in the Maiden (1200m) at 11.20pm.

“I think he will be very hard to beat. I have walked the track and it (going) looked pretty good to me. It is a big track – a good track”, he said.

Some 17 jockeys will ride at Callaghan Park while three – Nathan Day, Jason Taylor and Nathan Thomas “back-up” at Mackay’s TAB races on Saturday.

Day, if you will excuse the pun, is in for a big couple of pay-days as he holds 21 bookings for rides at Rocky, Mackay and through to Cairns on Sunday.