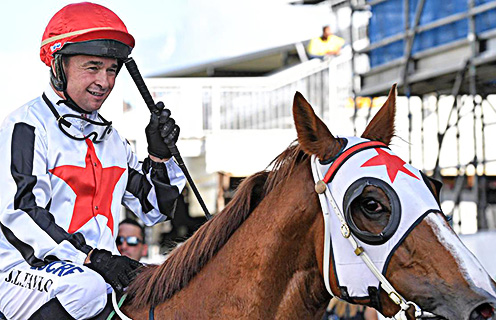 As the quote goes ‘’even when opportunity knocks, a man still has to get up off his seat and open the door” – Douglas McArthur.

Replace the door with a phone and the seat with a lounge chair watching mid-week races and pen-in Gold Coast jockey Jason Taylor, 50 and it makes for the perfect scenario. Granted” curiosity killed the cat” but I ran the risk and phoned Jason to ascertain why in April he re-joined the FIFO group of SEQ jockeys servicing Rockhampton and Mackay TAB mid-week race meetings.

About 20 years previously he was more or less a regular at those centres for feature meetings best remembered for winning a 2001 Rockhampton Cup on John Wigginton’s Skymaker. Since then, he has been “missing in action” riding in the deep south of the state. So why all of a sudden arrive back here virtually out of the blue Jason?

“I got badly injured in an accident at the Gold Coast behind the barriers (February, 2021) and I was out for about six months from race riding. After I decided on a comeback, I found I still really loved race riding and enjoying being a jockey. Trouble was I wasn’t getting the opportunities of many rides down around here (Gold Coast). I was getting a few of a Saturday but that was about it. Basically, I was just sitting around during the week watching the races. I was getting sick of it and when my manager Melissa Shields told me in March, she had been getting phone calls with riding offers from northern trainers I decided to get right back into it”, Jason said.

In hindsight and Jason readily agrees, it was a fortuitous decision as he has never looked back and it’s been full steam ahead. After a gradual start back flying in and riding at Rockhampton on April 8 and ensuring trainers, he was not just going to be a “one day wonder’’, the phone never stopped ringing. Taylor has tallied-up 11 winners up this neck of the woods since, including the feature $75K Mackay Newmarket (1300m) on Cabalo Escuro and the $50K MM Mackay Guineas (1560m) on Mississippi Prince.

Then on Monday at Callaghan Park racecourse Jason scored a wining double courtesy of Kerrod Smyth’s Frazzled ($10.00) and Nick Walsh’s Villa Villekulla ($7.00). “It’s all been a little incredible really. The reception from the trainers and officials and everyone in Rocky and further north has been fantastic’’, he said. Always well liked and the bearer of an infectious cheeky grin, Jason’ popularity will escalate even further once his next statement is taken on board by local racing administrators.

“The tracks up your way (Rocky, Mackay and Townsville) are absolutely perfect. I love riding them’’, he proclaimed. High praise indeed as Jason Taylor has ridden extensively throughout Australia where twice a GR 1 winning rider while also plying his skills in New Zealand, Singapore and South Africa.

On Thursday he fly’s in to Townsville where he has seven rides before riding Cabalo Escuro in the Cleveland Bay there on Saturday and Mississippi Prince in the Guineas. Endorsement indeed for the philosophy of never knocking an opportunity when it comes knocking or in Jason Taylor’s case telephoning.