“Hard to keep a good woman down” – Article by Tony McMahon 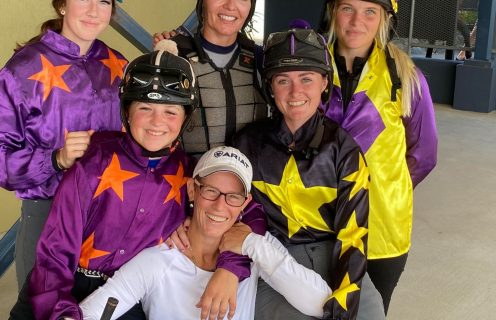 The politically corrected idiom “it’s hard to keep a good woman down” is appropriate while at the same time seemingly inadequate when applied to resilient Rockhampton jockey Natalea Summers.

Nat admits she has had more than her share of broken bones, injuries and surgeries from horse related mishaps since commencing her jockeying career at Kilcoy in 2005.

These include numerous arthroscopies, total left knee reconstruction, left arm nerve release surgery while she is just days off having surgery for a total left hip replacement.

In fact, Natalea compares herself to a 1976 Flashback Vintage Mustang.

Endowed with a rare and priceless self demeaning sense of humour, she did the unthinkable for a lady, knowingly and wittingly divulging her age.

“In a 1976 model myself. Like a fine old car, by replacing all the parts, in my case bones I’ll be priceless and better than ever”.

Refreshingly, Natalie has no qualms about making the vintage car analogy which she reckons is on the money.

‘’I’ve been in pain from the hip since a horse flipped over on me in the enclosure at Mt Isa in 2007. I actually had seven and a half years off and the surgeon told me at the time I would never ride again. I had news for him”, Nat said through that trademark cheeky grin of hers.

Natalea came back riding with a bang and was getting among the winners until a race fall in 2018 occurred.

‘’That tumble really upset things with the hip. It’s been bone on bone since with little bits crunching around everywhere”.

With resilience, she returned to race riding only to subsequently snap an ACL and sustain significant damage to her right arm.

Most of those injuries occurred as a result of a race falls at Rockhampton and then when she last rode at Mackay races on December 10, 2020.

“They really made things angry with the hip and I’ve been out of the saddle since, well sort of”.

She forgot to mention the accident didn’t help her left knee which has three screws inserted.

In January this year with a hip replacement pencilled in at the Brisbane Private Hospital on March 3, our Natalea reasoned the fitter and stronger she was before surgery the quicker she would recover post operation.

“I actually talked my surgeon into allowing me back on a horse to ride track work from January for that reason. He made one proviso saying don’t fall off.

I have worked very hard with the physios to get my body in shape and fitness and strength level up.”

“I hadn’t ridden in a trial or race for 14 months and I felt great and I didn’t feel that I had been away. It was my happy place and that is what I do and it was so good to be jumping from the barriers again”, she said.

Hard to be believe as it is, Natalea hasn’t put on an ounce during her 14 months out still remaining 51.5kg.

Now it is all systems go and not surprisingly Natalea already has a plan in place to get back race riding.

“The surgeon said I would be out for about three months after the operation. My goal is to be back riding trackwork in June and return to race riding in August. Really, I am so looking forward to it because of the hip It has affected my riding style. With the new hip or parts in car lingo I’ll be brand new again”.

Lookout for that 1976 Vintage Flashback Mustang-Summers model out on the Callaghan Park raceway later this year.