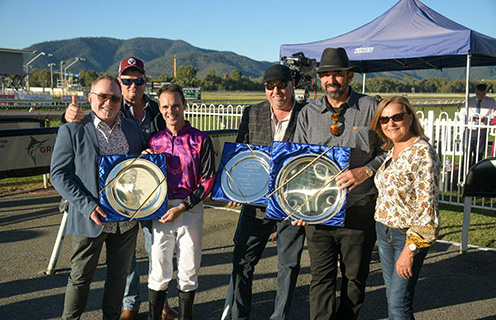 Ridden by the now Gold Coast based Noel “King” Callow who has ridden internationally in eight different countries, Doctor Zous ($6.50) got up in the last stride.

Last year Doctor Zous finished fifth in the Newmarket (1300m) behind Last Chance but his strong finish timed to perfection by Callow was much more resolute this time.

Victorious trainer Darry Hansen was emotionally buoyed after the win saying “I set him for the race” something he has made an art form of bringing to fruition.

It is likely that Hansen will travel further north with Doctor Zous chasing treasured regional sprints similar to his ploy last year winning the Cairns Newmarket after second behind Master Jamie in Townsville’s Cleveland Bay.

The “doctor’s” win was the second leg of a double for Noel Callow who provided the Gold Coast’s Toby and Trent Edmonds with their first of two for the day with Divine Courage ($4.40) in the Maiden (1300m.

The same father and son training team backed-up winning the next race the 2 & 3YO Maiden (1200m) with Cool’N’Ready (Robbie Fraad, $4.40) providing that jockey with the first of three winners.

Fraad., who bears a similar persona to the name of his winner Cool’N’Ready predicted a bright future for the gelding saying “I think he is a horse who could go places. I like him and he felt good”.

Mark Currie combined with top local apprentice Tahlia Fenlon to clinch the second segment of his winning double with Mill Rossa ($2.05) the impressive winner of the Class 6 (1200m).

After a frustrating run of four minor placings, ultra-popular guest jockey William Pike widely known as “The Wizard of The West” finally landed a winner for himself and trainer Tony Gollan in the Ken Russell Memorial (1300m).

Fittingly, the win on favourite Argyle Pink ($4.20) after a ride worthy of being beamed in apprentice jockeying schools came about in the last race.

In Perth where he dominated for over 12 years the catchy cry was “back Pike in the last” and judging by the boisterous jubilant winning reception William got at Callaghan Park around 5pm that news had made it to Rockhampton.

“It’s good to finally ride a winner here. Everyone and the race club have been so welcoming and great”, a glowing Pike said after dismounting from his 2941st winner.

The Callaghan Park track rated a “soft 6” after copping over 100mm of rain earlier this week raced superbly with visiting GROUP race winning jockeys praising it in unison.

More than one said “I’d love to take it (track) back to Brisbane” which is a mighty compliment for Callaghan Park track manager Trent Williams.

The BFB Scaffolding Rockhampton Cup program run on Saturday promises to fulfil expectations of a superb racing festival covering all facets of entertainment while putting Callaghan Park in the spotlight.