How good is this Rockhampton Trainers? 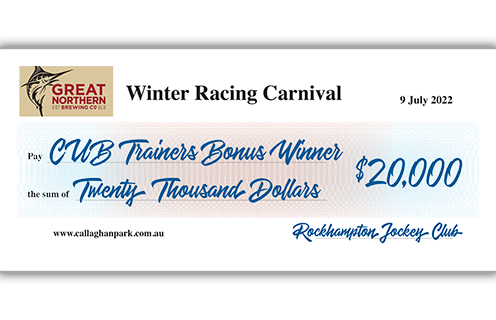 Yes one or two of these cheques – but the authentic ones could be in your hot little pocket by the end of next week. These prototype illustrative cheques are examples of the rewards for effort to winning trainers of the RJC bonus awards.

Firstly, local Rocky trainers are in the “galloping” for bonuses totalling $7500 over the four major days of the Winter Racing Carnival. After the two days of Tatt’s racing last weekend Tom Smith and Nick Walsh lead the back on eight points each. Hot on their heels are Ricky Vale and Graeme Green on six points. Other locals closely follow in the scheme sponsored by the RJC itself.

The $20 grand cheque has been put up by Great Northern – major sponsors of Rockhampton racing. “This enticing bonus is open for all trainers who race their horses on Latter Kennedy Newmarket Day (Friday) and BSB Scaffolding Rockhampton Cup Day next Saturday.

“I believe the RJC has really raised the bar with this initiative to incentivise trainers. By doing so we make it known to them in a fiscal way that our race club appreciates their contribution to racing in this city”, RJC CEO Ian Mill said. He said there was a strong chance a Callaghan Park trainer could win both bonuses – $4000 (local) and the $20K (major days).

Mill went on to say it was gratifying that the schemes had earned widespread praise from all trainers as well the Australian Trainers Association.
Points are allocated on a 3-2-1 format for first, second and third.

Entries for both Rockhampton Newmarket and Cup meetings close on Monday. Champion jockey William Pike is available for rides on both days.