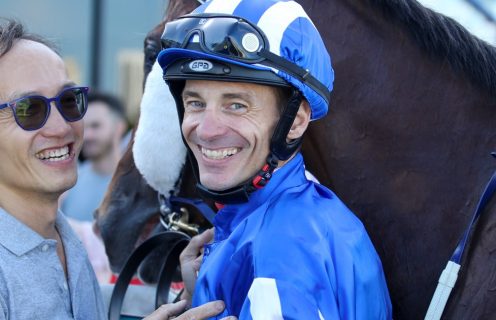 Sweet Dolly, four times a winner from five starts grossing $481,950 settled back in her trial over 900 metres before over-running her rivals to win in 53.96 seconds.

Yes, indeed it was impressive.

Well then what about Boom Time Baby also a 3YO which won her heat by just over seven lengths recording the phenomenal time of 53.62 seconds and akin to Dolly she was not fully extended?

I’ll get back to Boom Time Baby shortly but let’s talk firstly about Sweet Dolly.

Ridden by Ashley Butler deputising for race jockey Justin Stanley, the Kevin Hansen filly always a leader during her career, found herself last most of the way in the three-horse trial.

‘’It wasn’t planned that way but that’s how the trial panned out. She jumped a little slowly and Ash just held her up. When he did decide to go (in the home straight) she displayed a nice turn of foot. It was a nice quiet trial for her”, Sweet Dolly’s keeper and trainer Kevin Hansen said.

“If everything holds up Dolly will have her next start in a 3YO Handicap (1050m) at Doomben on April 9”, he said.

Kevin said Sweet Dolly had made a good recovery after her comeback run when weakening for third over 1200 metres at Mackay some three weeks ago after a year’s layoff through injury.

A win at Doomben in just over a fortnight would see Sweet Dolly’s star shine even more brightly and send her prizemoney spiralling towards $600,000.

Now to Boom Time Baby which made an impressionable debut at Callaghan Park on February 19 winning a Maiden (1100m) in a canter and by a margin of 4.5 lengths.

At Wednesday’s trial the Kevin Miller trained Spirit Of Boom filly zoomed straight to the front and demonstrated brilliant speed to win as she liked.

Eyebrows were raised when her time, some 0.34 seconds faster than that of Sweet Dolly’s was semaphored.

” She was very impressive and has been going really well since we freshened her after her win on debut. We decided it was too hot after that win to race her so we freshened her”, Miller explained.

The other part of the “we” is owner, the Pakenham, Victoria trainer and former jockey Frankie Stockdale,

“Frankie bought her I am pretty sure at last year’s Magic Millions March Yearling Sale at the Gold Coast”, Kevin Miller said.

Spot on Kevin as Stockdale outlaid $30K for Boom Time Baby a daughter of the unraced Gilded Time mare Cenotime which has now produced seven winners.

Boom Time Baby will next step out under much scrutiny in a 1050 metres race at Callaghan Park in a fortnight’s time.

Miller said Frankie Stockdale, a well-known name in Victorian races plans on bringing a team of horses up to Rockhampton for the Winter Racing Carnival.

The trainers most recent winner was The Cruiser at Moonee Valley on March 3 and his presence will be a boost for the Rocky Carnival.