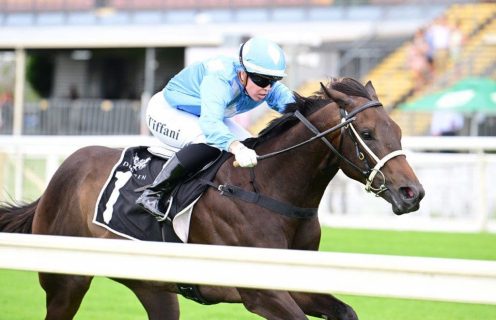 His bevy of Rockhampton owners are hoping their unbeaten gelding, Jemeldi, can join an elite club when he contests the $202,000 GR 2 Skyline Stakes (1200m) at Randwick on Saturday.

(If I have missed a successful candidate please advise and membership will be immediately granted).

Not surprisingly Tom Button said on Wednesday not long after arriving at Peter and Paul Snowden’s Randwick stables “there’s a swag of owners flying down from Rocky”.

After winning on debut at the Sunshine Coast on January 16 he made the next leap to a metropolitan win in typical fighting spirit over 1100 metres at Doomben on February 5.

That win cleared the slate taking his prizemoney to $57,200.

Those wins on soft tracks, particularly so the Doomben version, convinced the astute Button he had an above average juvenile in his care.

‘’He is a fighter. He fought them off in that Doomben win and forged away. He has always displayed that tenacious style”, Button said.

The phone started ringing in the ensuing days after the Brisbane win with inquiries if Jemeldi could be purchased.

“There were no firm offers but certainly genuine inquires to buy him. Many of the big syndicate of owners only have small share in Jemeldi so really the money would not amount to too much for them unless there was a massive offer. Everyone is just having fun racing him”, Button the managing owner himself said.

Tom made his feelings known after Jemeldi stepped off the float at Randwick on Wednesday.

“It’s the first time I have been on Randwick racecourse. I am just in awe of being here. Seeing all the old stables where so many champions were trained from – it is such a great feeling. I can’t get over the size of the place”, he said.

To be ridden by Sydney’s Jason Collett, Jemeldi drew widely at gate 13 but on Wednesday the trainer said he does not see that as too disadvantageous.

‘’It’s very wet down here and the track will certainly be rain affected which won’t worry Jemeldi as both his wins have been on soft ground. Actually, it could work in our favour to be drawn out and hopefully find cover. It is probably far beter to be wider out than near the inside. I reckon they will all go to the centre of the track anyhow”, he reasoned.

This afternoon (Thursday) Tom said it was still raining at Randwick but Jemeldi had settled in well to his new surrounds.

“The weather is wet – very wet. My partner Gabby rode him work at Randwick this morning (Thursday) and he was very good. Also, he ate everything up last night after his trip down here.

The way I see it the race is a pretty even field and if he can get cover, I expect he can be in the finish”, Tom surmised.

All eyes, particularly Rocky eyes, will be on Jemeldi in Race 4 at Randwick and he is listed as TAB 4.

Glamour Kevin Hansen Rockhampton filly Sweet Dolly has drawn the outside barrier at 10 in her crucial race come back in the $43K QTIS Jewel Qualifier (1200m) at Mackay’s TAB races on Saturday.

The Rockhampton Jockey Club stages a seven event TAB program of racing at Callaghan Park on Friday commencing from 2.12pm.