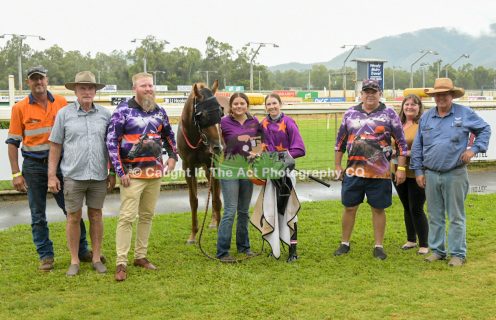 In-the-news Rockhampton apprentice jockey Tahlia Fenlon will be out to build on her memorable week at Friday’s TAB race meeting at Callaghan Park.
Tahlia 18, has a full book of rides on the seven race program which commences at the later time of 2.12pm.
Last Saturday night Tahlia was announced as joint winner of the 2021 Newcomer of the Year Award with another rookie, Beaudesert apprentice  jockey Jasmine-Lee Cornish.
This took place at the  Queensland Country Racing Awards ceremony at Emerald just hours after Fenlon scored a winning double at that towns Pioneer Park race meeting.
In fact, Tahlia landed another winning double at her previous race riding outing at Callaghan Park on January 27.
Proving to be somewhat of a pin-up girl with punters Tahlia’s following again will be strong.
Tahlia rides Double Proof,  Elusive Eagle, Jay Jay, Been Deadly, Cantor, Star of Leon and Whykayoh.
By racing’s conclusion at 5.49pm it will be a surprise if she has not added to her career tally of 37 – a worthy achievement in just nine months of jockeying.
That special talent, Brisbane’s Brad Pengelly has thrown out a tip to punters by flying-in for just two rides.
These are Thorden (Race 5 -TAB 4) and Last Of The Mohican’s (R7 -TAB 4).
It could be perceived that fellow Brisbanite Nathan Day is on a mission at Callaghan Park as well.
Nathan  obviously considers his only two rides are strong winning prospects in Emilee’s Empire (R 2 -TAB 5) and It’s A Calamity (R 4-TAB 7).
However, sometimes too much can be read into such exploits as Day was north bound anyway to ride at Townsville on Saturday.
Racing rules decree that jockeys can’t tip but their actions at times speak louder than words.
Such as Ashley Butler’s return from injury to take one Callaghan Park ride on Olivia Cairns trained Fire King (R 4- TAB 1).
Hear this punters, Ashley boldly accepted the ride even before he was finally cleared this week by his specialist- now if that isn’t a tip what is?
Winning wanderer Justin Stanley, fresh from six winners last week at Bowen and Emerald will also be in action at Callaghan Park tomorrow and Townsville on Saturday.
At the latter he teams with his partner in winning, the Rocky trainer Clinton Taylor with Magnetic Drive and Teeling.
Rockhampton trainer Ricky Vale is entitled to have been flabbergasted when his pair of talents in Absolut Artie and Namazu both drew barrier 15 in Doomben engagements on Saturday.
The odds of such an occurrence would be astronomical but both will start with Ryan Wiggins on board.
Nick Walsh has his stable stars Bollente and Aleysa’s Dream entered for Mackay races on Tuesday.
A rising entity among the local training ranks, Walsh has targeted Doomben assignments for the duo on March 26.
Sent from my iPhone