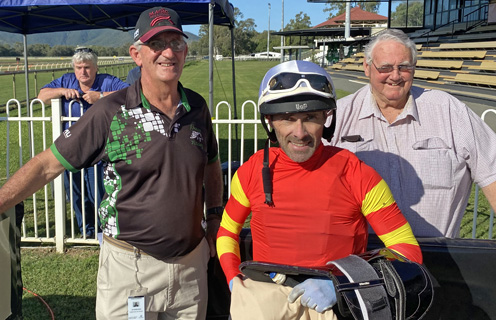 Gee things are really hotting up for the Rockhampton Winter Racing Carnival. The RJC’s brilliant Facebook Page and I may be biased but I reckon it is one of the best if not the best for a provincial race club in Australia, has all the upcoming events for you listed. There are over a dozen notifications for followers to digest about the Carnival. One of the big events will be the TAB Calcutta Luncheon at the Rockhampton Leagues Club on Thursday, July 7. I believe special guest jockey the one and only William Pike will be in attendance as well as riding the Rocky Newmarket meeting the next day. It is a must attend function so get in early to arrange tickets. Also don’t miss out on the Rockhampton Girls Grammar Race Day on Saturday week, June 18. Once again, all the details on the RJC Facebook page and website. I can get it why some people are shy of Facebook but I don’t get it why some keen racing followers aren’t on it to catch up with all the RJC news. Probably explains why they are behind in so many newsworthy reports when they reply either – “I didn’t know that” or even better “nobody told me that”. HELLO do yourself a favour and join the RJC Facebook Page. Guess what? It is free!

Visiting Pakenham trainer Frankie Stockdale has certainly hit the ground running during the fortnight he has been campaigning at Callaghan Park. On top of his second placegetter Riverside Special (May 27) he won with that horse as well as Flemington placegetter Barney’s Blaze there last Friday. Dubai’s Moon will soon improve on his fourth over 1800m the same day. While maths never really was my forte, I make it Frankie’s trio earned $28,050 in Rocky in seven days. Not a bad little earn to kick off a working holiday while campaigning on the northern winter circuit. Racing wise, Frankie shifts base to Bowen on Tuesday to place his six horses in a more strategic travelling position. “I have more travel options from there to race at Townsville, Mackay, Bowen and of course Rocky” he said. Stockdale somewhat of a character said “I couldn’t be happier with the way the race club and stakeholders have treated me in Rockhampton. I will be travelling back here more than likely for the June 24 races”, he concluded. Stockdale said he would be spreading that message when he gets back home. “I hope to come up to Rocky each winter in future if I can”, Frankie concluded. That was joy to the ears of RJC CEO Ian Mill and chairman Rob Carr.

Swag of Rocky horses entered for the rich $100K QTIS 2YO Classic (1200m) races at Townsville on Saturday. Tom Smith has Better Rain, Clinton Taylor (Betterdeel), Jared Wehlow (Bonaugura) and Jason Morgan (Tour De Dream) in the 2YO. The race favourite will be Missile Thunder (Roy Chillemi – Tolga). Bred by Bluff’s Warren, Robyn, and Aaron McLaughlin the Smart Missile youngster was sold for $32.5K at MM and has earned Hedley racing and friends over $113K to date. Under the set weight conditions of Sat’s race Missile Thunder will only carry 57kg. In a handicap would have at least 5kg more. Just like Paradis Imperial when she won the Classic in 2017, Missile Thunder looks an absolute special to me on facts and figures. Then again 100/1 shots have won Melbourne Cups -The Pearl (1871), Wotan (1936), Old Rowley (1940) and Prince Of Penzance (2015).

Jockey Chris Whiteley delivered another winner for Callaghan Park trainer Graeme Green in Kotabharu last Friday at Callaghan Park. “The two winners since I resumed from injury in just a week have been for Graeme (Ahooshu)”, Whiteley told me after dismounting. The Green team always has good horses in their stable and maybe, just maybe none more consistent than Hallowed Crown mare Kotabharu (18 starts 4-8-2-$136,150) which is raced by Green, Ron and Bev White and Maureen Olive. Then again, they do (apart from Maureen) race Master Jamie (40-15-10-4 $678,450). Had I left out Master Jamie, I certainly would have left myself open for criticism. Me criticised – no never!

IN BRIEF:
Jockey Ashley Butler who suffered a broken jaw on the night after his magnificent win in The Archer on Emerald Kingdom in Rockhampton on May 7 is recovering slowly from his injuries. Ash had to have five teeth removed and then braces fitted. He goes back to a specialist in Brisbane next week and again three weeks after. “I hope to be back riding in about six to seven weeks”, Ash said today. Best of luck Ashley. Marway back in work with John O’Sing. The RJC has an $80K brand spanking state of the art Treadmill Machine in storage waiting to be installed at Callaghan Park. It will be a huge aid to trainers struggling to get horses worked and others who realise that these days racehorses can even be galloped on the treadmills. I don’t care what anybody says not too many race clubs would go to that expense and trouble to assist local trainers. Top southern stables swear by them as a brilliant additions to their training tools and techniques. Tom Button, Nick Walsh and Fred Noffke made purchases at the MM National Yearling Sales last week. Which reminds me Tom Button celebrated his 43rd birthday today (Monday, June 6). Count on it that Tom will have a string of horses in Rockhampton chasing the Great Northern $20,000 trainers’ bonus over the Newmarket and Cup meetings in July. Incidentally, congratulations to trainer Kerrod Smyth on his Callaghan Park double last week,