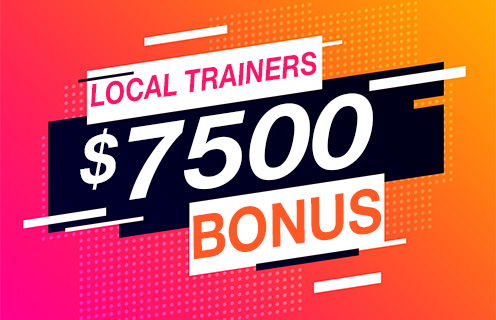 It seems local Rockhampton trainers are certainly going all out to win the $7500 in bonus money on offer for them over the four days of the RJC’s Winter Racing Carnival. The local who amasses the most points allocated on a 3-2-1 basis over Tatt’s Sprint Day (Friday), Tatts Cup (Sunday) Latter Kennedy Newmarket (July 8) and BFB Scaffolding Rocky Cup (July 9) wins $4000. Second highest takes home $2500 while the third-place getter earns $1000. It is a generous offering from the RJC which is self-funding the bonuses for the local trainers in recognition of their support.

Not too many race clubs in QLD (if any) do let alone dig into their own funds for a scheme for the locals. Better still the club is “spreading the love” whereby three trainers will benefit from the $7500 distribution. Not forgetting of course locals are also eligible for the $20K Great Northern bonus awarded the leading trainer over the two main days of the Winter Racing Carnival on Friday, July 8 and Saturday, July 9. Look it is a fantastic initiative all round and being parochial let’s hope a local trainer gets the bickies.

Adrian Coome has the biggest entries for Rockhampton trainers with eight horses nominated over the two days of the Tatts Carnival. Jared Wehlow has seven nominated while Ricky Vale has six horses penned in. Graeme Green also is in for a busy time with five entries as has Clinton Taylor and Nick Walsh. That’s not to say of course that host of other trainers with two or three runners set for the two days of Tatts can’t knock the numbers men off. The bonuses make for another fascinating focus of interest for the next three weeks.

The Walsh trained Villa Villekulla looks the horse to beat from where I sit in Friday’s $30K LJ Hooker Rockhampton Tattersall’s Sprint (1200m). Sunday’s Tatts Cup (1600m) is a much more open affair with the interesting runner being Green’s Master Jamie. That star sprinter has not raced since May 28 when second over 1300m at Mackay. It will be some training effort by Graeme Green if Master Jamie can win Sunday’s Cup at his first attempt over a mile. Then again Master Jamie is some horse and Graeme Green certainly knows what he is doing.

Toowoomba trainer Steve Tregea has long been a grand supporter of the Rocky Winter Racing Carnival. Steve is a gentleman and a very good trainer too boot. I remember him winning a Newmarket at Callaghan Park way back in 2010 with Baqaba Ric McMahon the pilot. Steve quickly backed Baqaba up in the Rockhampton Cup (1600m) which I think back then was two days after the Newmarket. Baqaba ran a fighting second behind Brian Guy’s Shuffle The Cash.

I’ve always believed a trainer that can “back-up” a horse successfully in a just a few days is very good at his trade. Steve Tregea is certainly in that category. Does the name Incentivise ring a bell? It should as Steve owned and trained the Shamus Award gelding to win six straight in Queensland before selling part ownership in the subsequent champion which went on to win three straight in Melbourne including last year’s Caulfield Cup. Then incentivise was a courageous second in the Melbourne Cup before going amiss. Steve told me today (Tuesday) he has sold his remaining ownership share in Incentivise.

Tregea leaves from Toowoomba on Wednesday morning with his team for Friday with the majority to be ridden by Anthony Allen. Nicknamed “The Ant” Anthony has enjoyed a very successful association with Steve Tregea who is a very loyal.  Naturally they combined with Incentivise. Anthony who rides wearing a hearing aid is a very talented jockey with over 500 winners to his name. Some 58 of those have been at Callaghan Park where he was most dominant in the years from 2102 to 2014 as an apprentice.

Finally, keep updated on all the happenings over the Winter Racing Carnival from the RJC Callaghan Park Facebook page and website. While at the risk of being biased as a major contributor, I believe the club’s sites are first class and racing followers in this neck of the woods are indeed spoilt if you will forgive me for saying so. You just have to do a little Facebook “stalking” if that’s the right term to know that.