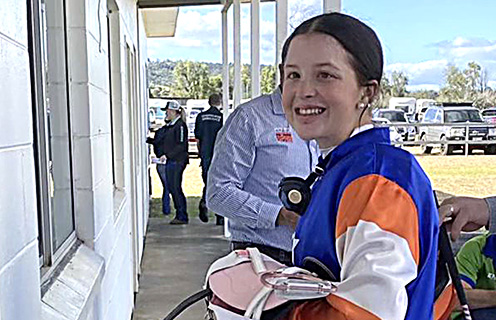 First and foremost, congratulations go out to Rockhampton apprentice jockey Brooke Johnson on riding her debut winner at her first day of race riding at Thangool last Saturday. Brooke 19, is indentured to trainer Benny Crear who trained her nine lengths winner of the BM 60 (1600m) in Grand De Lago. It was a fitting win as Grand De Lago owed Brooke who suffered broken ribs after being dislodged by the head strong horse some months ago at track work. Brooke had three earlier rides on the Thangool card and they came in ninth, last and seventh.

Well done to Brooke who developed her horse skills around the pony club and show circuits before becoming smitten with riding thoroughbreds. Keep up the good work ethics Brooke and the pleasant demeanour as both will take you places.

Rocky’s Ash Butler hasn’t wasted time getting back among the winners since resuming at Townsville races on June 28 after seven weeks sidelined with facial injuries. In the ensuing three weeks Ash has ridden five winners including Louis January (Jared Wehlow) and Diamonds’N’Stones for Olivia Cairns on Mackay Newmarket Day last Friday.

Then the next day he booted home Marway a winner at Thangool last Saturday before winning on Clinton Taylor’s Kick On Command at Rockhampton on Tuesday. Butler heads 720kl north to Townsville races on Thursday where one of his rides is the Adrian Coome trained Plenty.

Were you one of many wondering as to why trainer John O’Sing would take classy sprinter the dual Sydney winner Marway to Thangool last Saturday to compete in an $8500 race there? It was brilliant placement by John as the Thangool race was an Open Plate (1200m) with set weight conditions of a restricted 60.5kg topweight handicap. Just 15 days earlier in a much strong Open Lightning Handicap (1000m) at Mackay, Marway, a 12 times winner with abt $440K in his kitty carried 64.5kg and tailed the field on a soft track.

Rightly so, John reasoned Marway would be beautifully placed under the weight conditions and the firmer Thangool surface as well as needing a crucial fitness run for his next important mission. That being the $100K Cleveland Bay Handicap (1300m) at Townsville, on Saturday, August 6. “He really needed that start at Thangool. Ash Butler will ride him at Townsville”, John reported. Great placement John. The old racing yarn goes “if you feed them right, work them right and place them right they should do all right”.

Knowing how to place a horse is half the battle in my book. I remember the late trainer Athol Strong telling me when I was the teenage handicapper of the Gold Coast Turf Club “son always put yourself in the best of company and your horses in the worse”. Regrettably, it is often so obvious that those roles have now been reversed.

Stupid question I know, but in racing journalism you just have to ask the obvious as some time the answer can be the unexpected. I went through the motions with Graeme asking “will Bubba be riding him at Townsville”? “Not even a surgeon could get him off the horse if he tried”, Graeme replied. Good quote. Be very interesting to see what weight (and any variance) Marway and Master Jamie get under the quality handicap conditions of the Cleveland Bay with a 61kg topweight. Big drawcard for the Townsville Turf Club.

What a spectacular winning trot the gifted jockey and fine gentleman the Gold Coast’s Robbie Fraad is enjoying. Since June 1 up to and including last Saturday (July 16) Fraad has ridden an astonishing 29 winners at eight different racetracks. Haven’t seen a word mentioned of it. In that time span of just over six weeks Robbie has ridden at 20 different race meetings. Those winners including four at the Gold Coast (June 18), trebles at both Rockhampton and Ipswich as well as doubles at Doomben, Gold Coast, Rockhampton, and Mackay last Friday.

Gold Coast based and GR race winning rider internationally, Robbie is no spring chicken at 57. His work ethics are admirable and a shining example to others half his age to follow. For example, last week he rode at Grafton (Wed/Thursday), Mackay (Friday) and Gold Coast (Saturday).  I’d be stonkered. After he rode three here on Newmarket Day, I jokingly commented to him “Robbie you are becoming very unpopular up here as you are riding too many winners”. Blessed with a great sense of humour he retaliated “just trying to keep the wolf from the door Tony”.

It seems with respect that some racing stakeholders up this way and further north are just waking up to Fraad’s ability. I am a great believer in the theory “in racing it costs the same amount to engage the very best jockey as it does a very average one” and I say that in general terms with no aspersions cast towards anyone. Try doing that in any other business say for example the medical profession where specialist doctors cost yonks more than GP’s. Well, there are certainly specialist jockeys and, in my book, Robbie Fraad is one of them.

Mackay Cup races this Saturday followed by Middlemount Cup Day on Saturday week with $60K up for grabs. Then Rocky on Monday, August 1 and Keppel Park, Yeppoon on August 6 and Emerald TAB meeting, Monday August 8.