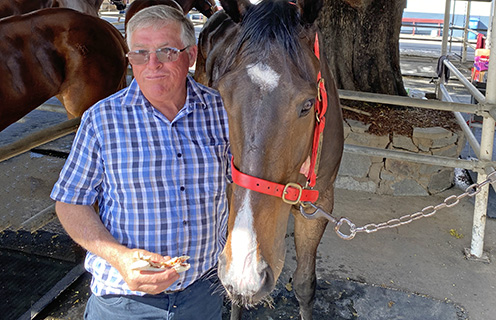 Always been a great believer in the adage – “credit where credit is due” and Rockhampton trainer Kerrod Smyth fits that bill perfectly. In recent times Kerrod has been flying under my radar but that only lasts for so long before detection is recorded in the form of words. Last Saturday at Mackay capped a big week for him when through a superb front running ride by the Gold Coast’s Jason Taylor the stable’s Mississippi Prince won the $50K Magic Millions Whitsunday QTIS Guineas (1560m).

How appropriate that MM sponsored the race as originally Mississippi Prince was sold there as a weanling in 2019 for just $2000. Mississippi Prince (br g 3 Foxwedge-Urban Legend) came to Smyth earlier this year as a one unplaced run maidener. Smyth has turned that around in four starts this preparation for three wins and a second for $86K in prize money which should make the trainer a pinup with the owners. Just a few days earlier at Callaghan Park, Rockhampton the Smyth stable produced QTIS 2YO Maiden (1100m) winner Money Muncher (br g 2 Dissident-Solar Choice x Choisir).

The gelding is one of seven 2YO’s raced by Springsure’s Fred Noffke with whom that family has had a long association with Kerrod since his training days out there. Fred said he had to go over his limit and pay double when buying the Dissident colt at the 2021 Capricornia Yearling Sale in Rockhampton for $32,500. “I thought at the time here goes another money muncher and that’s how he got his name”, Fred explained after greeting his winner. Other recent winners for the Smyth stable have been Mocial Chief and Tricky Beans.

Since deciding to re-enter the Rockhampton and Mackay “fly in” zone again the Gold Coast’s Jason Taylor has been going great guns. He won the recent $100K Mackay Newmarket (1300m) on Cabalo Escuro while his other recent wins up this way have included Sundara and Highground. Taylor, 50 was somewhat a regular at Callaghan Park about 20 years ago and is remembered winning the 2001 Rockhampton Cup for John Wigginton on Skymaker.

Ten years later Jason won the 2011 GR 1 Stradbroke on Sincero. Interestingly enough the trainer Taylor has enjoyed the greatest number of winners with was John Hawkes with 72 victories. If that’s not recommendation enough what is? Jason’s welcoming smile, ability and lightweight status makes him a popular addition to the ever-changing brigade of FIFO jockeys riding at Callaghan Park and Mackay.

OK, I’m skiting but don’t say I didn’t tell you so about the phenomenal winning run that another FIFO Gold Coast jockey Robbie Fraad has been experiencing. In last week’s column it was recorded Robbie had ridden a staggering 29 winners since June 1. He soon added to that with double at Gatton last Friday and a treble at Mackay the next day including the $150K Cup winner Sayl.

That made it 34 winners in 53 days at 22 race meetings. Nothing short of remarkable and unrivalled anywhere in Australia. Unless he appeals and chances are he will be, having not pleaded guilty to a careless riding charge on board Sayl, Fraad may have to cool his heels after being outed from August 1 for 12 days.

See where young Rocky trainer Tom Smith 21, has his stable star the very good juvenile Better Rain (b g 2 Better Than Ready-What A Smile) entered for Eagle Farm in a $125K QTIS 2YO Handicap (1400m) on Saturday. Raced by passionate Callide Valley racing men Stewart Nobbs and John Howard, their $39K 2021 MM March Yearling Sale purchase has developed into something special returning them $193,550 in stakes which has bought plenty of “steaks” for the two cattlemen.

Tom Smith has sent Better Rain racing on eight occasions for three wins and five seconds including a latter placing in the $500K Gold Coast Jewel in March. Isn’t it good to see two wise old (sorry boys I meant older) racing heads give a bright young trainer like Smith a go? I sure reckon it is anyhow and best of luck lads (that’s a square off Stewie and John) as the distance should suit providing the weight is not excessive. Tom also has I Am Clever entered for the “Big Smoke” – is that a politically correct term to use in this age of nonsense? Probably not the way things are going!

Good to read where Toowoomba trainer and regular to Rocky Carnivals Steve Tregea 66, of Incentivise fame is handing over the reins to his right-hand man Josh King 26. Josh is the son of trainer Norma King, the partner of that character of a trainer Mick Hicks best remembered as the mentor of that super sprinter and 2YO of the early 2000’s Murphy’s Blu Boy. Mick was based at times for memory at Thangool and Springsure and Josh King rode his share of winners as an apprentice around Capricornia and the Central West but weight was his nemesis as a jockey.

Steve Tregea is a gifted trainer, thoroughbred breeder but more importantly a generous and good man. “I’m 66 now and getting a bit tired (training) so I will hand the majority of the horses over to Josh”, Steve said. Know where you are coming from Steve as I’m fast approaching 70 and you just have to know when enough is enough. Good luck Josh as you are being given a chance of a lifetime and trust recent Rocky winner Enabler runs well for you at Eagle Farm on Saturday.

BRIEFLY: Trust the once-a-year club at Middlemount on Saturday is rewarded with sufficient jockeys to ride at their Cup meeting on the spacious dirt track. Afterall the club is paying jockeys an excellent extra $80.00 per ride! I won a Middlemount Cup one year with Craiglea Convict and a sprint out there with that flying machine Van Maanen – couldn’t she go.  Can’t understand really why over the years more Rockhampton trainers haven’t taken their lower-class horses out to Middlemount for the day.

It is a fabulous meeting and takes on a real Show like atmosphere for all the kids with hurdy gurdies and entertainment rides galore. Pleasing that Rocky jockey Natalea Summers was back winning at Emerald last Saturday on her partner Darry Johnston trained Shatter Proof. Keep bringing home the winners Natalea. Also well done to Callaghan Park trainer Dale Whyte winning with $20.00 chance Whoshotthemagician at Mackay last Saturday.