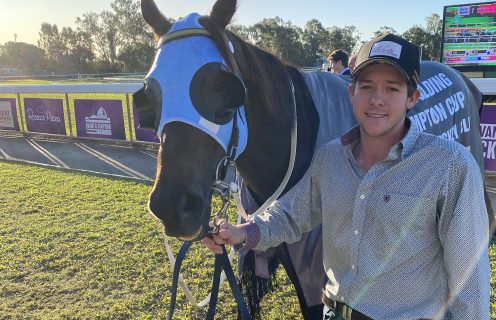 The Rockhampton Jockey Club has announced premiership and awards winners for the 2021-22 season which wound to a close last Saturday. Trainer Clinton Taylor was the premier trainer with 20 Callaghan Park winners for the season. It was a fine effort by Clinton who accumulated a total of 54 winners all up for the season.

Incidentally, James Orman once a regular on the Rocky and northern TAB circuit topped the figures with a sterling 139.5 wins. Queensland winners for the season, Rockhampton’s Tahlia Fenlon won the Rockhampton Apprentice Jockeys premiership with 21 Callaghan Park winners, a remarkable performance considering she didn’t even start riding on the Rocky track until last December. Even better Tahlia was placed 11th on overall QLD figures with 76 winners in just her first season of race riding. She also won the premier jockey and apprentice title at Mackay for the season. In other awards announced today by the RJC, Will Johnston was named the Strapper of the Year and Kris Hansen the RJC Barrier Attendant for the 21/22 season.

On a countback, the Kerrod Smyth trained Mocial Chief won the Horse of the Year Title on a countback from Lyle Wright trained Emilee’s Empire. By coincidence both horses won five races, ran two seconds and a third each at Callaghan Park while Mocial Chief got the nod as it also recorded a fourth. It doesn’t get much closer than that. Tom Smith’s Better Rain was the Rockhampton 2YO of the year while Graeme Green’s Ahooshu won the 3YO title. I intend to elaborate further on the above-mentioned winners in the weeks ahead. It should make for interesting reading.

Massive meeting at Townsville on Saturday where in a first a consolation division of the time-honoured Cleveland Bay Handicap (1300m) was declared after 30 horses accepted to run in the $100K race. Well done Townsville Turf Club in programming a consolation offering $50,000 in stakes – sure better than about 14 horses missing a run. Callaghan Park trainer John O’Sing admitted “he couldn’t believe it” when his comeback sprinter Marway was only allotted 56kg in the Cleveland Bay.

That meant the engaged rider Ash Butler missed the ride as he couldn’t make the weight. Former Rocky jockey, the now Townsville based Scott Sheargold got the lucky nod as pick-up rider. However, John O’Sing was not impressed at all when Marway drew gate 16 in the barrier draw. “Blame Kylie Welburn for that as she went up and drew the number” at the barrier draw John said.

No such concerns for Rocky super horse Master Jamie (won the Cleveland Bay last year) when barrier two came his way in the gun sprint. Rocky Cup winning jockey Les Tilley naturally retains the ride. From there with his capped topweight of 61kg you would reckon Jamie will take some beating.

Other locals in the “real” Cleveland Bay are Tim Cook’s Brad (14-Melea Castle); Jamie McConachy’s Montenegro Man (15-Chris Whiteley) and Adrian Coome’s Plenty (4-Robbie Fraad). Rockhampton also has starters in Saturday’s $150K Townsville Cup (2000m). Tom Button’s The Tax Accountant is more or less a local with a stack of Rockyites in the ownership. TTA drew seven gate under top Townsville hoop Graham Kliese. Tim Cook’s Schappose (11-Melea Castle) and Ricky Vale’s Namazu (6-Alex Patis) will also represent the Beef Capital. Despite having drawn gate 20 (probably come in to 13) the Cup looks an ideal race for Mackay Cup winner Sayl and actually the wide draw should suit for his jockey Robbie Fraad. In all a whopping 160 horses (you read right) accepted for the massive meeting there at Cluden on Saturday.

Speaking of Townsville, congratulations to Callaghan Park based trainer Kristie Clark-Peoples for springing an upset win at Townsville today (Thursday) with $41.00 chance Centaur (Adrian Layt). Hope you had a few dollars on as well Kristie.

BRIEFLY: Tom Smith’s Better Rain did Rocky proud with a game second in Brisbane last Saturday. Should be a great day’s racing at Keppel Park, Yeppoon on Saturday. Always affords a fabulous atmosphere at one of Queensland’s most nature friendly and picturesque tracks. Don’t forget to book entry tickets on line through the Yeppoon Turf Club’s website. They reckon “hope springs eternal”. That was certainly the case for last Saturday’s Middlemount Race Club winner Money Travels which finally won a race at it’s 46th race start.

What would the odds have been of five times Melbourne Cup winning trainer Lee Freedman winning a humble Warwick Maiden? I hear you “astronomical”. Well, that’s exactly what the seven times premier Melbourne trainer and Hall Of Famer mentor of 124 GROUP I winners did last Monday with Texas Hold ’em. Incidentally, Lee Freedman turns 66 next Friday. I know a cove that celebrates his 70th birthday in Rockhampton the day after. Off the top of your head can you rattle of Freedman’s Melb Cup 5? I couldn’t but for the record – Tawrrific (1989), Subzero (1992), Doriemus (1995) and Mayybe Diva (2004-2005).