Street Glory heads towards 2YO Classic – Article by Tony McMahon 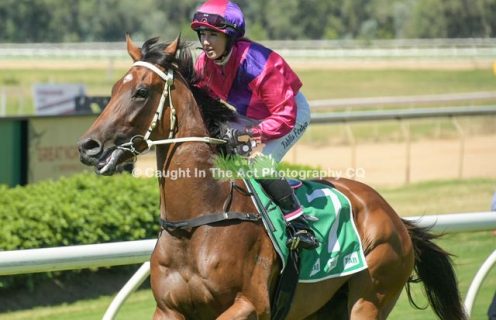 Starting at $8.00 despite winning a local barrier trial just five days earlier, Street Glory earned $25K in prize money for the win in the QTIS 2YO Maiden (1100m).

Street Glory was offered by Oaklands Stud at last year’s Capricornia Yearling Sale in Rockhampton and left the sale ring with a $16K purchase price attached.

She is trained by John Wigginton who races her in partnership with stable clients Darrin Nilsson, Ian Duncan, Geoff Dunnett, Wayne Pearce and John Lorberg.

Chuffed by the win, Wigginton said Street Glory would head towards the rich CYS Classic at Callaghan Park on April 9.

“It was a good sound win with much to like about. She seems to have come through last Saturday’s race well so we can map out a program for her shortly”, Wigginton said.

By winning Street Glory also enhanced the value of her half-brother sired by Power (GB) which will be offered at this year’s CYS on April 10.

This colt is all Oaklands Stud bred being by their highly successful stallion Power which is siring winners throughout the world from the Break the Vault mare Antiquity.

While unraced, Antiquity has certainly infused her foals with galloping prowess.

She was already the mother of multiple winning juveniles Kodai (x Sidereus) and Queen Of Style (x Wicked Style) before Street Glory burst onto the scene.

Tony Fenlon, the convenor of the CYS said the win by Street Glory was certainly timely.

“Neville Stewart from Oaklands has been a great supporter of the Rocky Sale (CYS) for as long as I can remember. He is sending a small but select draft up here this April.

Without any doubt the Power-Antiquity colt, a half to Street Glory will be keenly sought after. Buyers know that Neville sells winners. Oaklands has already produced multiple winners of the CYS 2YO Classic.

For memory its half-sister Queen Of Style ran third in the 2020 Classic won by the Oaklands bred Miss Lot Won”, Fenlon correctly stated.

The Tom Button trained and mainly Rockhampton owned Miss Lot Won will be one of the main contenders for the CYS 3&4YO Championship (1300m) at Callaghan Park which is also run-on April 9.

On the strength of two previous barrier trial wins, Boom Time Baby (x Spirit of Boom) started favourite at $2.35 and ran the brilliant time of 1:03.75 seconds scoring an emphatic 4.75 lengths.

Boom Time Baby sold for $30,000 at the 2020 Magic Millions March Yearling Sale and the daughter of the Gilded Time mare Cenotime is a half-sister to five individual winners.

Judging by Saturday’s win Boom Time Baby could be something special.

A brilliant runaway win by the Tom Hedley Racing owned Missile Thunder in Tuesday’s Townsville 2YO QTIS Jewel Qualifier (1200m) evoked cheering out at Bluff by its breeders the Warren McLaughlin family.

They sold the youngster last year at the MM March Sale for $32,500 and will offer a half-brother by Red Dazzler at the Gold Coast in March.

Missile Thunder is a son of the Mossman mare and Callaghan Park winner HalleMcollywil and now qualifies for the $500K 2YO Jewel (1200m) at the Gold Coast on March 19.l