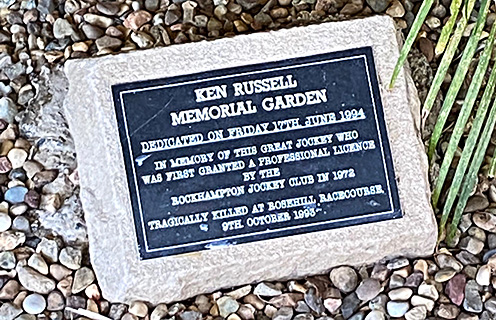 I have always been a hoarder of old newspaper clippings relating to horse racing. Ironically, on the very day before the Ken Russell Memorial was being staged at Callaghan Park last Friday week, I came across this gem published in the Gold Coast Bulletin in 1984.

It was the report on the Rockhampton colt Golf Field winning the Golden Nugget Stakes (1200m) ridden by Ken Russell when trained by Lottie Lisle, wife of the jockey Colin (Lizard) Lisle. It was one of seven Golden Nuggets (forerunner in those days to the Magic Millions) that the late great jockey was to win. Incidentally, K.Russell was to ride two Magic Millions winners in Sea Cabin and Malibu Magic.

The Ken Russell story is as well known as Ken himself was acclaimed. From Monto where his father Gordon, a retired jockey trained, Ken never served an apprenticeship which was denied by the RJC (Principal Racing Club) at the time.

Aged 20, he had ridden as an amateur jockey for his father before in 1972 the RJC granted him a fully fledged jockeys license. His first professional jockey race winner was Frosty Val at the now defunct Banana racecourse on June 24, 1972.

Who would have ever envisaged in a whirlwind career of just 21 years the racing world would become the “Monto Marvel’s” oyster? Ken rode 1804 winners including seven at GR 1 level. He won 14 jockey premierships at various jurisdictions in QLD and NSW. Adding icing to the cake, Ken Russell rode four winners in a day 24 times and a treble on 106 occasions! Not to mention riding the program on another occasion at Thangool.

A champion on and off the track, Ken Russell was held in the highest esteem during his 42 years on earth and 21 on racecourses both throughout Australia, Dubai, Singapore and Malaysia where success greeted him. Among his many illustrious victories was that of Euclase winning the GR 1 1992 Goodwood Handicap (1200m) in Adelaide. Ken rode numerous winners for Euclase’s owners Sydney’s Geoff and Beryl White in their famous livery of white, purple star and hooped sleeves.

Beryl White, who continued her late husband’s participation in thoroughbred breeding, died aged 88 on Sunday of this week. Those colours (now slightly faded) are depicted on the monument sculpture of Ken on display in a garden setting to the left of the Callaghan Park racecourse entry gates in Rockhampton. The monument was commissioned not long after Ken’s tragic race fall death at Rosehill on October 9, 1993.

Ken’s poignant funeral ceremony was held in Monto with the pallbearers being some of Australia’s top jockeys of the era. His sculpture was prominently displayed in Monto until moved to Callaghan Park racecourse, Rockhampton in 2016.

So next time you enter Callaghan Park racecourse glance to the near side and embellish the lifelong memories Ken Russell provided the racing industry and particularly Rockhampton. After all Ken always revered winning the 1980 Rockhampton Cup on Panard trained by his father Gordon.

The Gold Coast Turf Club, where Ken derived his moniker “King of the Coast”, as well as the RJC stage a Ken Russell Memorial annually. Ken still has family and friends including Peter and Liam Goody of the Rockhampton race’s sponsor Rockhampton Mini Loads living around the district. So too for that matter are relatives and friends of Golf Field’s connections the Colin Lisle family.

I sincerely hope this accompanying newspaper clipping and photos and my words invigorate cherished memories for them as well as all lovers of racing. As is said – “to live in hearts we leave behind is not to die”, Thomas Campbell (1777-1844).

HOOFNOTE: Coincidently, on the same day I discovered the paper clipping I entered Callaghan Park and observed Stephen Bryant volunteering his time to caringly scrub and clean the Ken Russell monument. Thank you Stephen and thank you Ken Russell.