The Mystery of The Ken Russell Memorial Sculptor Revealed: By Tony McMahon 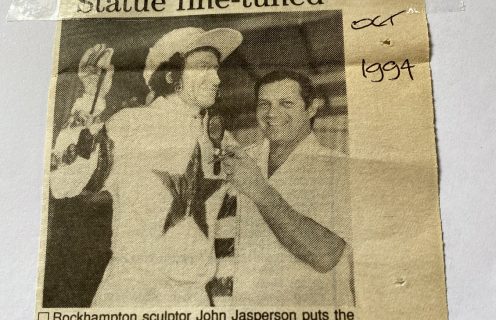 Stories published on this site in mid-July pertaining to the late champion jockey Ken Russell and his Memorial Garden and sculpture at Rockhampton’s Callaghan Park racecourse generated a massive response.

This not only came about through social media websites but personally I fielded inquiries as well.

Some folks were curious as to the identity of the sculptor which at the time I could not provide them with an answer.

As fate so often has it, while flicking through some of my old files from The Morning Bulletin newspaper (Rockhampton) this morning Friday, August 5, lone behold, I came across the attached clipping dated only as October 1994.

This revealed the sculptor was John Jasperson.

Further research I undertook established that John Jasperson was based in Gladstone.

His works became iconic in Rockhampton during the nineties as he designed and sculptured two large Brahman bulls for the city including the one displayed at the Yeppon Roundabout.

This is at the southern Bruce Highway entrance to Rockhampton and is faced to both welcome travellers entering and those departing the city.

Originally the Ken Russell sculpture was displayed in Monto but it was replaced by a bronze version and unveiled in 2016.

Monto has Ken’s birth place and where he first honed his jockeying craft and the town is immediately associated through his moniker as “The Monto Marvel”.

The bronze statue’s prominence is highlighted being displayed in the Lions Park close to the northern entrance to Monto.

Understandably it is on the “bucket list” for racing minded tourists who flock to the area throughout the year.

Monto, a rural town is located about 500km north west of Brisbane and 235km south of Rockhampton in the Burnett Region of Queensland.

Incidentally, the Rockhampton Jockey Club next race at Callaghan Park racecourse on Thursday, August 18 and the Ken Russell Memorial is on the immediate left inside the entrance gates.