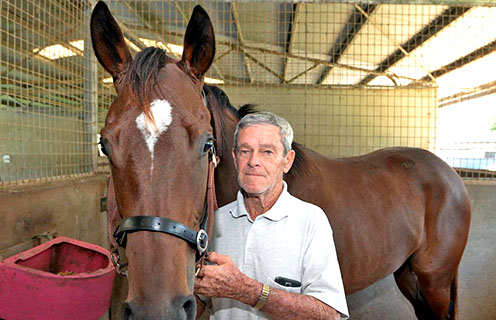 An era in Rockhampton racing that spanned over four decades officially ended this week when four times premier Callaghan Park trainer Lyle Rowe was admitted to an aged care facility in the city. Rowe had been hospitalised in Rockhampton for the previous four weeks as a result of a medical condition.

Lyle, as a notable Brisbane jockey won the 1967 GR I Stradbroke Handicap (1400m) on Mister Hush, had enjoyed lasting good health throughout his life until August 7, 2020. On that fateful pre-dawn morning at Callaghan Park racecourse, Rowe sustained serious head injuries while leading a horse from his on-course stables to the tie-up stalls to ready for trackwork.

As a result, he suffered a fracture and a bleed from the brain and was hospitalised for seven weeks after which his training career went into unfortunate decline. “I don’t remember a thing about the accident”, he said at the time while a nearby stable hand recalled hearing a “dreadful thump” before he was found on the ground.

While maintaining a small stable during the 20/21 season, Lyle trained three winners with his last being Bantu Bay on June 30 last year. Over the past two years, Melinda Morris, the treasured Rowe employee and “second in command” for the last 14 years has been his rock in loyally maintaining the daily stable operations.

A successful jockey in Brisbane in the sixties and seventies and stable rider for the powerful Fred Best establishment, Rowe relocated firstly to Mackay and then Rockhampton in the early eighties. As a jockey, Lyle Rowe won Rockhampton Newmarket Handicaps on Wentwel Lad (1976) and Kero (1980). In Rockhampton he later would forsake jockeying and begin training, firstly on a part time basis from stables in Tomkins Street, North Rockhampton.

As success quickly materialised from horses the likes of Storm Boot and Fast Buck with whom Lyle won 18 races each, he took up training full time and later moved base to Callaghan Park racecourse stables. This proved fruitful as he went on to become the premier Rockhampton trainer for four consecutive seasons from 2012 through till 2015.

While a Rockhampton Cup eluded Rowe as a jockey he achieved that goal as a trainer winning the 2011 version with Monashee Mountain gelding Canny Climb ridden by David Simmons. It was a memorable win for Lyle as the chestnut with whom he won 10 races was part-owned by family members including his wife and greatest fan Patricia.

“It doesn’t get much better than this”, he said to me that day after getting his hands on the coveted Rockhampton Cup. That Cup win in 2011 had been all the more meritorious as Cannyclimb had been under a cloud leading up to the race from the effects of a hoof bruise.

Lyle Rowe always maintained Laurinel Impulse, owned by his long-time stable patron Paul Kirkwood was the best horse he trained and that was saying something.

During his reign at Callaghan Park, he also had gifted horses of the calibre of Mythologist (11 wins), Kilwinning Option (9 -went on to win in Sydney), Legal Procedure, King’s Love and Barefoot Contessa.

While a fine exponent of moulding yearlings he had chosen into winning 2YOs (153 wins), Lyle was also a treasured mentor of apprentice jockeys including three times premier Luke Dillon.

He was so highly thought of in this sphere that he was the chief tutor and convenor of the Rockhampton Jockey Club apprentice school for many years.

“Lyle is very well respected in the racing fraternity not only in Rockhampton but throughout Queensland. He is a valued member of the Rockhampton community in general and always was willing to help in any way he could. The Rockhampton Jockey Club and I am sure all stakeholders extend their best wishes to Lyle and his wife Patricia”, RJC chairman Rob Carr said today. (FRIDAY).

Tricia (Patricia) has also endured health issues for some considerable time and has been a resident for approximately a year at the care facility where she is now joined by Lyle.

As a long time friend for over 50 years, I join with Rob Carr in endorsing the sentiments he expressed for both Lyle and Patricia.