Were You at the 1992 Rockhampton Cup? 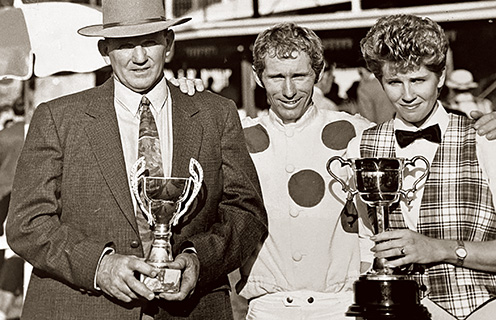 The BFB Scaffolding Rockhampton Cup (1600m) carrying prizemoney of $150,000 will be run at Callaghan Park racecourse on Saturday, July 9. In the lead up, photos and at times editorial in relation to past winners of Rocky Cups will appear on this site. First staged in 1918 over 10 furlongs and running for 500 pounds in stakes, the Cup was won by Rolad (J Hull) and trained by T. F. Stanfield.

Today’s photo is that of former leading Rockhampton trainer Dave Badham, jockey John Stephens and Dave’s daughter Leanne Applewaite who raced the winner of that 1992 Rockhampton Cup (2000m) in Archer Road. Dave enjoyed a magnificent career as a horse trainer and still resides in North Rockhampton. John Stephen 62 is still a licenced Rockhampton jockey and is currently sidelined after sustaining a serious back injury in a barrier incident in February.

Speaking to him at the Callaghan Park barrier trials last Tuesday he indicated he hoped to gain a clearance to ride again soon. Leanne Applewaite trains a small number of horses on a part time basis in Rockhampton and has enjoyed considerable success. In his 1992 Rocky Cup win the ultra-consistent and durable Archer Road, accustomed to winning with huge weights of over 60Kg, relished his drop to 56kg. In the lead-up to the Cup he had won with 64kg at Emerald and had only ever been out of the prize money once in his 39 starts before his Cup success. Indeed, a worthy winner was Archer Road as were the recipients in this photograph which first appeared in the Rockhampton Morning Bulletin on June 15, 1992.