Winners Were Grinners at the RJC Winter Racing Carnival 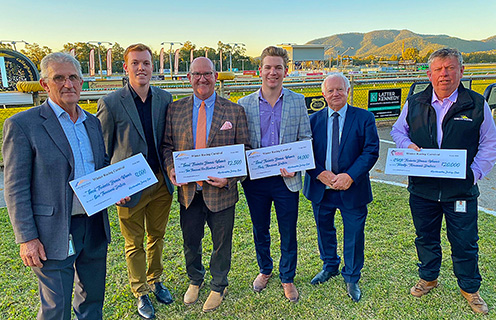 A self-made American business woman (particularly in the world of cosmetics) from the humblest of origins to reaching meteoric heights, Mary was also a mistress of words particularly inspirational quotes.

For the purpose of this exposé, I’ve chosen another of her quotes in regard to recognition. It reads “there are two things’ people want more than money – recognition and praise”.

Over the duration of the Rockhampton Jockey Club’s Winter Racing Carnival, the club provided both money and recognition to a group of stakeholders, trainers and horse attendants or strappers.

Local Rockhampton trainers vied for sizeable portions of the $7500 cash put up by the club for the leading point scorer of the four feature race meetings involved.

Tony Gollan was a comprehensive winner of The Great Northern Leading Trainer Bonus for the Newmarket and Rockhampton Cup days meetings and claimed the $20K prizemoney. Toby and Trent Edmonds came in second.

Gollan brought a 12-horse team north from Brisbane for two days while Trent and Toby Edmonds despatched 8 from their Gold Coast stables.

Without doubt both bonus schemes achieved their main objective in drawing horses out of their stables to race at the RJC Winter Carnival meetings.

In particular Tom Smith, Nick Walsh and Graeme Creen can be proud of their achievements over the Carnival and the recognition bestowed on them was well deserved.

For the record according to Racing Queensland those three trainers have impressive winning strike rates for the current season. Walsh has an amazing 36% winners to runners, Green 21.1% and Smith 10.7%.

All attendants leading horses in each race on Saturday were judged with the one best dressed awarded $100 cash by the RJC. Individual winners included Renae Welburn, Jordan Lehmann, Brooke Brummel and Casey Bailey.

Renae Welburn was judged best dressed attendant leading a runner in the enclosure for the Rockhampton Cup and won herself another $300. The recognition as well as the dollars were appreciated by them all.

Out on the Callaghan Park track first-class racing was always assured with so many GROUP race winning jockeys competing. The Coast based Robbie Fraad who has ridden successfully in Hong Kong (won a premiership), Singapore, South Africa, Dubai, New Zealand, Mauritius, Japan and Australia, rode five winners over the two days.

Celebrity jockey William “The Wizard of the West Pike” landed three winners, four runners-up and two third placegetters. Both are True blue gentlemen and gifted talents and it was a real coup for Rockhampton racing to have them riding on Newmarket and Cup Day.

Robbie Fraad 57, has ridden over 1500 winners and listen to this according to my calculations off Racing.Com and incredible 24 since June 1 – seven weeks. As I was penning this article, he bobbed up winning at Grafton today (Wednesday) on Geostom while he will be riding at the Mackay Newmarket meeting on Friday.

William Pike was a joy to interview and just have a chat to and I watched his rides very closely.  It was easy to be convinced why he has been so successful with something like 3645 winners in just over 20 years of jockeying. He positions his mounts cleverly, balances them up and is patience personified before “going for them”.

Robbie and William contested a protest hearing when Pike on Kindling Spirit beat Fradd on Beyond Fate 0.2 lengths in the Class 1 (1050m) on Saturday. It was a moral to be upheld after the latter sustained interference at a crucial stage from Pike’s mount in the straight.

And it was upheld by stewards and William was “found guilty” by them of careless riding and suspended for eight days from midnight July 18 to conclude midnight July 26. When stewards’ reports read “found guilty” it usually means the jockey pleaded not guilty as in most cases they do.

Just like Robbie Fraad, the Wizard was back in action at Warwick Farm races today (Wednesday) winning on the Chris Waller trained Waverider.

Yes, it was a brilliant RJC Winter Racing Carnival and plaudits galore to all concerned as the two big days really had a feel-good vibe about them.