A Day for Hamish – Article by Tony McMahon 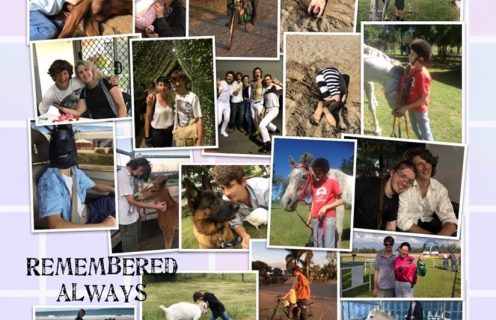 If ever the quote sits comfortably with Rockhampton jockey and mother Natalea Summers it would have to be “a boy’s best friend is his mother”.
Those touching words would rest peacefully alongside her son Hamish Summers-Lawrie (RIP).
At this Thursday’s Callaghan Park races in Rockhampton, Natalea will sponsor two races named in his honour and provide unique glass in scripted trophies of octagonal shapes to the winners.
The races are the third – Hamish Summers-Lawrie Memorial Class 3 Plate (1600m) and race seven, the Autism Awareness Class 2 Handicap (1300m).
As well, Natalea has had racing silks designed by renowned specialists Hyland’s to be worn in each race bearing the colours blue, black with yellow, red, green and blue jigsaw symbols embossed.
The puzzle pieces represent autism, a persistent developmental disorder with latest figures suggesting a rate of 1 to 70 Australians or 353,880 are currently diagnosed amid an increasing trend.
A perpetual trophy will also be in place for the annual running of the Hamish Summers- Lawrie Memorial.
Hamish Summers-Lawrie (his father’s surname) died tragically on July 30, 2019 as the result of injuries in a motor vehicle accident at Alton Downs at the age of 19.
Hamish was autistic, a condition that made him all the more special and loving for his mother as they shared an extraordinary bond.
‘’Thursday’s race meeting falls on April 21 which would have been Hamish’s 22nd birthday. Not a day goes by that I don’t miss him terribly. Challenging and stressful as it was raising a child with such complex needs, I would not exchange a second for it,” Natalea poignantly said.
The mother and son were virtually inseparable as she described Hamish as being “the other half of me” and often they would ride trackwork together at Callaghan Park racecourse.
Mum, Natalea recovering from a hip replacement hopes to be back race riding in the near future and be assured her focus is on riding in these races named in honour of Hamish next year.
“This race meeting is hopefully going to grow and become something bigger and better each year”, she said.
As fate would decree, Hamish certainly hasn’t made it easy for punters to pick the winners of both trophy races.
Former Victorian and Sandown 1600 metres placegetter Quality Asset (TAB 3) and a dual recent winner for trainer Jared Wehlow is credentialled correctly to win the first of Hamish’s races.
The Garnett Taylor Sunshine Coast trained Bold and Lucy (TAB 7) with the benefit of Montana Philpott’s 3kg claim is suitably placed to figure in the Autism Awareness Class 2 (1300m).
Racing commences at Callaghan Park at 12.47Pm with the last of eight events to be run at 5.05pm.
On Saturday the Yeppoon Turf Club stages its first race day for 2022 at Keppel Park racecourse with strong nominations having been taken.