A Special Picture Worth 1,000 Words 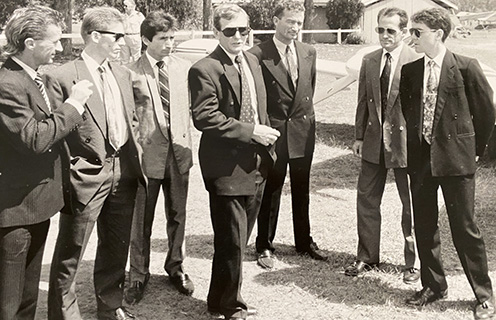 Last week’s article on the Ken Russell Memorial Garden at Rockhampton’s Callaghan Park racecourse inspired widespread memories and comment from throughout Australia of the master jockey and gentleman.

I vividly recall attending Ken’s funeral at Monto in October 1993 in my capacity as racing writer for The Morning Bulletin, Rockhampton. In quite different capacities – as chairman of stewards for the Northern Rivers Racing Association (NSW) and later as horse trainer on the Gold Coast, I had engaged with Ken Russell numerously.

Such was the respect and esteem by which he was held in, some of Australia’s most prominent racing industry stake holders flew in from all parts of Australia to attend his Monto funeral service. These included seven of Ken’s former mates and on-track competitors, the top Sydney jockeys of the time in Malcolm Johnston, Mal Fitzgerald, Peter Losh, Chris Gwilliam, Grant Cooksley, Geoff Allendorf and Craig Carmody. They arrived from Sydney via Brisbane by chartered flight to Monto’s small airport.

Try as I could when featuring the story on Ken Russell last week, I could not locate the accompanying photo of the group at the airport that day. You guessed it, I stumbled across it today (Monday) and felt it would revive stirring memories for racing followers.

After hours of research (which was definitely incomplete), I have summarised some memories of the seven (left to right) who rode over 10,000 winners between them.

“Miracle” MALCOLM JOHNSTON now 65 needs no introduction. The winner of multiple Sydney Jockey’s premierships (and as an apprentice too if you don’t mind) he rode in excess of 2000 winners in 11 different countries. These included no fewer than 39 GR 1 victories and of course his name is always associated with the immortal Kingston Town. Malcolm won 25 races on Kinston Town which won 30 in all.

Retiring from race riding in 1997, Johnston later went on to training and led in around 200 winners before calling it quits in October, 2020. He mixed that with working as a racing television commentator and is still a much-sought guest speaker at sporting and charity functions. Malcolm has often appeared in that role in Rockhampton.

MAL FITZGERALD was a leading Sydney apprentice and successful jockey riding 48 winners in the 1991/92 season when Ken Russell was dominant. Fitzgerald won five GR class races in a rather brief career that saw him retire in 2010.

PETER LOSH 59, was one Australia’s lightest jockeys during his 31 years career that landed him winners on 41 Australian tracks including one apiece at Rockhampton and Townsville. Peter tasted GR race success on Prince Ruling and was much in demand by some of Australia’s top metropolitan trainers because of both his skill and being able to make the lightest of weights. He rode hundreds of metropolitan winners in both Sydney and Brisbane as well as enjoying success in Britain. Peter rode his first winner at his beloved Wyong track (where he was apprenticed) on Punto in 1974 (I was present that day as handicapper/steward for Wyong), Ironically, P. Losh won on Sparkling Sands at Wyong on his last day of riding on September 1, 2005. Peter and family are proprietors of a stationary business on the Central Coast of NSW.

CHRIS GWILLIAM was a leading Sydney jockey in the eighties and early nineties winning 42 races in the 1990/91 season. Gwilliam rode successfully for most of the prominent stables including Jack Denham, Syd Brown and Geoff Maynes. He also enjoyed success for NZ trainer Nigel Landers. One of his first notable feature wins was aboard Rich Reward winning the inaugural Black Opal Stakes at Canberra in 1973. Chris enjoyed a reign of success riding in Singapore from 1975 until 1981.

“The Iceman” GRANT COOKSLEY, 62 so named because of his cool and cold riding style that were major contributors to him riding over 2600 winners retired from jockeying in 2019 in his homeland New Zealand. Cooksley was a formidable force in Australia when he crossed The Ditch and settling winning among other two Sydney Cups. In total THE ICEMAN won a massive 67 GR 1 races as well as more than 70 combined GR 2 & GR 3 majors. Before returning to NZ, he was based in Queensland towards the end of his career, retiring back home in August, 2019.

GEOFF ALLENDORF, 65 retired from race riding in Sydney in 2003, He was a prolific winner of races there and at the nearby provincials while always being prepared to travel to service country regions. Allendorf was right up there winning for the likes of Dr Geoff Chapman, Brian Mayfield-Smith, Max Lees and Jack Denham. By coincidence, Allendorf’s sole GROUP I winner was aboard Western Red in Sydney which went on to become a stallion based at Paul and Fiona’s Power’s Riverside Stud on the outskirts of Rockhampton during the nineties. Incidentally on visits to Callaghan Park, Rockhampton over the years, G. Allendorf rode three winners.

CRAIG CARMODY, 54 rode 91 winners during the 1992/93 racing season and was at to the top of his game alongside Ken Russell in the early part of that season when Ken passed. Craig won 10 GR 1 races including the 1990 Doomben Cup on his favourite, the great stayer Intergaze as well as a GR 1 win on the Queenslander Stylish Century. Craig rode in Rockhampton just the once for a placegetter. He officially retired from race riding in December 2003. Craig has become a successful Randwick trainer and just last Tuesday trained two winners at Goulburn. His brother Gavin, 40 is a well-known and much liked SYK RACING commentator. Gavin’s humorous quips and banter and comments with co-host Gary Harley on the northern Sydney provincial racing circuit broadcasts, are most entertaining.

As I attest, this accompanying picture was just too special to file away and as is said … “a picture is worth 1000 words” but I am not counting today!