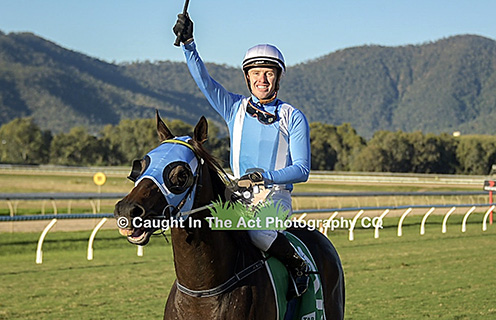 It mattered little as Master Jamie through his courageous display under 59.5kg had spoken loud and clear on the Callaghan Park track defying his rivals after claiming the lead at the 250 metres.

It was a classic case of “actions speaking louder than words” and Green brought to tears of pride and joy, knew that all too well.

“Words just won’t come to me. What can I say”, Green said as connections and his stable associates hugged him as he wiped back tears?

Tilley a 10 times winning jockey on Master Jamie including that at his debut at Callaghan Park in a 2YO Maiden (1050m) on November 9, 2018 sooled him across the field from 11 gate to gain the early lead.

That in itself was no easy task and energy sapping as well but not so for Jamie.

Then after having to be ridden aggressively to gain that position in the first 200 metres of the Cup, Jason Taylor challenged on eventual fourth placegetter Deep Breath ($19,00) to take up the running.

Being the professional he has always been in a career expanding 42 starts, Master Jamie relaxed obligingly and trailed the leader by two lengths before issuing his challenge from the straight’s top.

Deep Breath however was dogged and did not capitulate without a fight before Master Jamie sprinted past him with 200 metres remaining.

For Green and his fellow owners of Master Jamie that 200 metres must have felt like an eternity as late charger Sir Barnabus emerged from the pack.

Coaxed on by Tilley’s persuasion and the vocal cheering of a huge local proportion of the large crowd imitating “riders in the stand”, Master Jamie produced his usual “Tru Grit” and won comfortably.

It had become a trademark of the game horse in all his 16 wins (inc previous start with 65.5kg) and 14 placings which have netted his connections $792,500 while bringing dreams to life.

Who would have ever thought that the Poet’s Voice (GB)-Verkko x Flying Spur colt that sold at the Magic Million March Gold Coast Yearling Sale in 2018 for just $10,000 would scale such heights?

Ironically, Tilley won the Centenary Rockhampton Cup in 2018 on another local Mamselle Corday which was also a bargain $5000 purchase at the 2013 MM March Yearling Sale.

However, the Rockhampton Cup win is only part of the Master Jamie story.

Those career heights by the way saw Master Jamie ascend to higher recognition when on December 12, 2020 he won a race appropriately named the $250K The Gateway (1400m) at Eagle Farm.

Admittedly, Jamie’s dad Poet’s Voice x Dubawi was a star on English tracks but his mum Verkko was only able to win a humble Mortlake Maiden (1300m) in 2009 and run four other placings in 12 starts.

Which only goes to prove that lucks a fortune and the good Lady sat with Graeme Green that fateful March Day at the Gold Coast sale.

As the emotion and euphoria ignited by the Cup win abated, Green was glowing in his praise at the Cup presentation not only for Master Jamie (that has been well documented), but also his associates.

“Firstly, I want to thank these wonderful owners beside me, Ron and Bev White who have backed me with horses since I first started training here. I wouldn’t be standing here today holding this Rocky Cup if it wasn’t for them. Also, Bubba Tilley for another brilliant ride. Then my staff and these two track work riders here Mark Unwin and Will Johnston (Cup strapper) who do the work on the horse on the track”, Green said.

However, there was one special person missing from the presentation ceremony who Graeme gave heartfelt thanks.

“My wife Julie is back at the stables attending the horses. She doesn’t come to the races for fear of bringing me bad luck. I can’t put into words how hard she works and what a support she is to me”, Green said.

As the song goes “Words don’t come easy” nor does the hard work, dedication and time it takes to mould a yearling into a racehorse let alone manage a star like Master Jamie – congratulations Team Green.