Dolly’s BACK – article by Tony McMahon 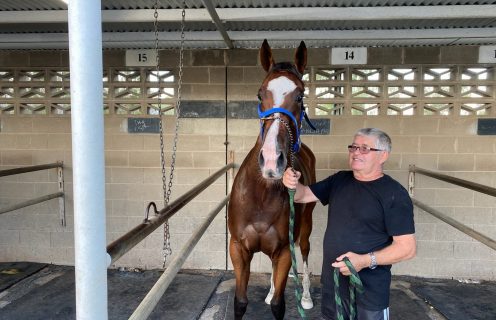 Sweet Dolly, the rags to riches Cinderella Princess of Rockhampton racing is just over three weeks away from making her long awaited return after being nursed back to health by trainer Kevin Hansen.

Purchased for just $1500 by the Capricorn Coast’s Michelle and Ken Walker at the 2019 Magic Millions Weanling Sale, Sweet Dolly is unbeaten at four starts with $477,750 amassed in stakes.

This magnificent record culminated reaching a crescendo in the rich Aquis Jewel 2YO (1200m) at the Gold Coast on March 13 last year after which a career threatening injury was detected.

In lay man’s terms the injury was described as a little hole around the sesamoid near a suspensory ligament on one the Real Saga filly’s legs.

After successful surgery at Gatton Equine University from which the diagnosis was very positive Sweet Dolly underwent a regimented long convalescent and rehabilitation program.

“I’ve had her back in training about eight weeks. Really, I couldn’t be happier. She hasn’t missed a beat. All going well there is nice race to start her off just over three weeks away at Mackay”, Hansen revealed.

He was referring to the $43K QTIS Jewel Qualifier 3YO Plate (1200m) on Saturday, February 26 in which Sweet Dolly would carry the luxury weight of just 55kg under the set weight conditions.

“That’s the plan and the set weights will really suit her”, Kevin said stating the obvious.

The likelihood is that under handicap conditions Sweet Dolly would have been assessed on 60 plus-kilograms.

If all goes to plan and Sweet Dolly pleases connections, she would then be aimed at the $500K QTIS Jewel 3YO (1200m) at the Gold Coast (March 19) on the eve of the MM March Yearling Sale.

Kevin’s Hansen’s son Chris relocated from the Gold Coast last year and he has been riding Sweet Dolly in her trackwork at Callaghan Park.

“It is great having Chris back up here as he does a great job with the horses and is a huge help to me”, Hansen said.

Sweet Dolly became hot property after winning at her second start in the LR Calaway Gal Stakes (1000m) at Eagle Farm on December 12, 2020.

Michelle Walker turned down a substantial offer for the filly reasoning that the joy Sweet Dolly was providing for husband Ken who had been unwell was something money could not buy.

In other local racing news, gifted local jockey Ashley Butler is also on the road to a successful riding comeback after being out of the saddle since late October 21 last year.

Butler fractured a foot in three places while also sustaining a ligament injury in a track work accident at Callaghan Park.

The jockey satisfactorily came through his first big step towards a return after competing in three barrier trials at Callaghan Park last Friday.

Ash is so confident of being given the “all clear’ (medical clearance) by his doctor on February 10, that he has accepted a race ride at Callaghan Park the next day.