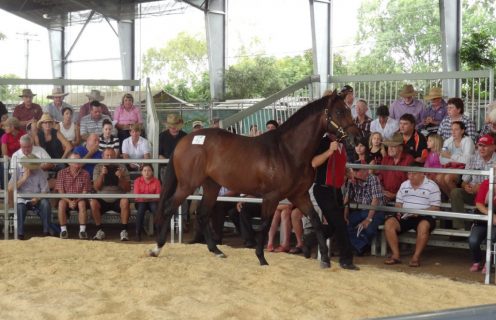 A spate of recent winning performances from graduates of Rockhampton’s Capricornia Yearling Sale has really shone the spotlight on the 2022 edition in April.

In the last three weeks at least a dozen horses sold as yearlings through the CYS have been successful throughout Queensland and New South Wales. Rockhampton’s Capricornia Yearling Sale has really shone the spotlight on the 2022 edition in April.

These were highlighted by the win of the Rockhampton owned The Tax Accountant, a 2017 CYS graduate which romped home in strong company at Townsville just last Friday.

In didn’t stop there in Queensland’s north as the next day, two yearlings sold at the 2019 counterpart now racing as Final Crime and Fiveaclocksomewhere were also successful at Home hill.

Both were bred and sold by Oaklands Stud on the Darling Downs which will be sellers again at the 2022 sale.

This sale will be held in the Robert Schwarten Pavilion at the Rockhampton Showgrounds on Sunday, April 10.

The sale will highlight the three major days of the Rockhampton Jockey Club’s CYS Carnival with two superb days of racing immediately preceding the Sunday.

Two progeny of Basil Nolan’s prolific sire of winners from Raheen Stud in Golden Archer and both CYS graduates also won over the weekend in different states.

The following day at Lismore, The Golden Soul a Corella Stud lot from the 2019 CYS was successful over 1410m.

A week earlier the Whittington gelding Adamdeeant flew the flag for the CYS winning at Tuncester in New South Wales.

Other Rocky sale’s graduates in Been Deadly (Mackay); Glen Isla Miler and Emilee’s Empire (Rockhampton) and Montana Night (Dalby) have added to the timely winning ways.

Tony Fenlon the Capricornia Yearling Sale’s convener for the 2022 sale expects a catalogue of 100 yearlings.

Nominations close later this week and Fenlon said he would be in a position to elaborate further early next week.

“It is looking very good at this stage with progeny from many of the big-name stallions entered”, he said.

A number of graduates from recent CYS are among the starters for the Rockhampton Jockey Club’s TAB meeting at Callaghan Park on Thursday.

In other news on yearling sales, Central Queensland buyers were active at the Magic Millions at the Gold Coast which concluded on Monday.

Rockhampton’s Green Racing purchased a Better Than Ready colt (Lot 1117) for $90K while earlier Rockhampton trainer Jared Wehlow bought a colt by The Mission (1067) for $72.5K.

Rocky Amateurs committeeman Alan Acton and his wife Jennifer went to $460K to secure Lot 119, a filly by Hellbent.