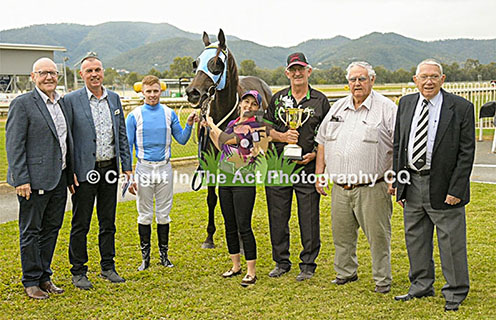 Surely it had to be their most glorious hour together and there have been plenty since Master Jamie entered the life of trainer Graeme Green at the MM Gold Coast March Yearling Sale in 2018.

It came about at Rockhampton’s Callaghan Park racecourse on Sunday just after 3.50pm when Master Jamie under 65.5kg (10 stone 4 pounds) led throughout to win the $30K Tatts Cup (1600m).

Words don’t come easy to justifiably define the magnificence of the freakish achievement considering “Jamie” was making his first attempt at the “mile”.

Wait for this though – he had not raced for 29 days making it an even more masterly achievement for both horse and his coach Green.

Given those facts it was no surprise that punters played Doubting Thomas’s sending Master Jamie to the post as a $10.00 chance.

“All I can say is that he is just a special horse. He’s incredible really. He is something else”, Green said downplaying his training effort and placing all the credit on Master Jamie’s shoulders.

And what shoulders they are – more like steel than bone.

After all, Master Jamie (b g 5 Poet’s Choice (GB)-Verkko) has lumped damming weights throughout his career of 41 starts winning 16 times and being placed another 14 for earnings of $695,500.

In fact, in 30 of those races he has carried 57kg or more, while handicapped up to 66.5kg and yet according to Green his pride and joy Bulldog Jamie is going better than ever.

“He came back into the enclosure after the Tatt’s Cup as bright as a button. Walking him back to his stable an hour later he was on the toe and kicking out at everything that went by”, Green said.

Les “Bubba” Tilley, who after Sunday has now won eight times on Master Jamie will have the coveted ride in the Cup which is run under Quality Conditions with the topweight capped at 61kg.

Tilley is no stranger to Rockhampton Cup success winning the centenary version on Mamselle Corday who like Master Jamie was a leader, a tried-and-true racing model for Cup success.

“That’s the plan all going well. Then if he (Jamie) tells us he is OK we will go to Townsville for the Cleveland Bay (1300m) on August 6”, Green said.

London Bell (Ryan Wiggins, $2.90) a $370K yearling had tried nine times before to win a race from dispatchments firstly from Bryan and Daniel Guy at the Gold Coast and then Wehlow.

After such a successful two days of Tatts racing on Friday and yesterday all players making up the industry’s varied components can rest-up until the Winter Carnival fires up again at Callaghan Park on Friday week.