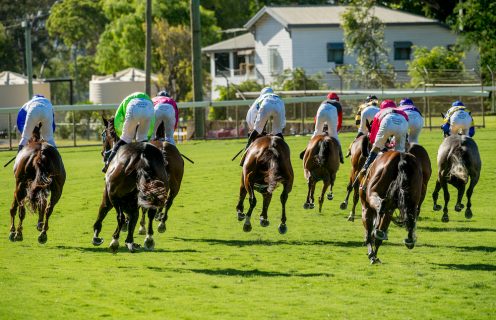 The racing world of Rockhampton’s Jason Morgan has entered a new sphere through last Thursday’s Callaghan Park winner Tour De Dream which could live right up to her name.

Morgan 53 and his racing partners wife Lisa and friend Craig Weatherley now have every right to dream confidently about the outcome of the $125K Capricornia Sales 2YO Classic (1200m) in April.

‘’We expected her to race well as she trialled very impressively at Callaghan Park a week or so before leading into the race. She had improved from the trial win so we thought why not run her in the race”, Morgan reasoned.

He said that Tour De Dream would probably have another start in the near future to provide her with more race experience for her rich goal.

“She is not QRIS so the Capricornia Classic is her best chance of getting amongst the big money”, Morgan said.

Tour De Dream named simply after a newspaper heading at the time her registration application was being submitted cost the trio $20,000 at last year’s CYS.

She was from the draft of Basil Nolan’s Raheen Stud, Warwick, an operation that has produced a number of CYS 2YO Classic winners.

Jason Morgan has a long association with Rockhampton racing having worked in his teenage years as an office clerk with the Rockhampton Jockey Club.

As a driver, Jason was a multiple harness racing premier in Rockhampton behind horses trained by his father Barry during the eighties and nineties.

“I would be lost without Snowy’s (Mark) dedication and assistance as he rides Flicka (Tour De Dream) trackwork and has played a pivotal role in her education. I read once that a trainer described him as Australia’s best track work rider. I would not disagree with that statement”, Morgan said.

The win was timely for “youthful” Rockhampton businessman Craig Weatherley who celebrates another birthday on Australia Day this week.

As alluded to in another racing essay on this site last week, the winning procession by graduates from Rockhampton’s Capricornia Yearling Sale continued last Thursday.

In winning, the Lyle Wright trained Carrara mare Emilee’s Empire which failed to meet her very basic $4000 reserve at the 2019 edition for breeder Susan Peddle, lifted her stakes to around $130K.

Last Thursday’s win under Nathan Day in the Class 3 (1100m) brought up three picket fences (3 successive wins) for Emilee’s Empire which is raced by the trainer’s wife Helen.

Daughter, Alyson Wright revealed that the stable had earlier “sacked her” (Emilee’s Empire) and had actually sent her out to a property to become a broodmare.

However, unforeseen circumstances changed that and Emilee’s Empire returned to training at Callaghan Park and has never looked back.

Given her recent form resurrection, it would not surprise if Emilee’s Empire heads towards the $75K 3 & 4YO CYS Classic in April.

Entries for this year’s CYS will be announced this week.