ONE MORE SLEEP BY Tony McMahon 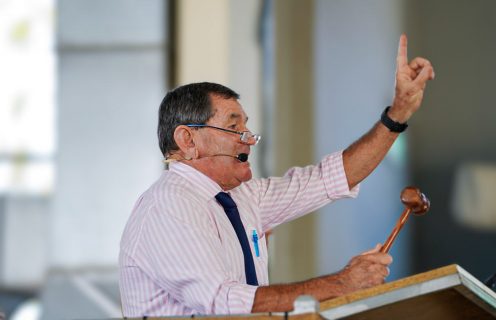 It’s time consuming and it seems like I have been writing about it forever but it has finally arrived.

Of course, I am referring to the Hygain Capricornia Yearling Sale Racing Carnival which commences tomorrow (FRIDAY) with an action packed eight race TAB card with 83 starters.

It carries over at the RJC’s Callaghan Park venue to Saturday with the crown gems the DVL Finance CYS 2YO Classic Plate (1200m) and the Ulton CYS QTIS 3&4YO Handicap (1300m).

By now you would be well aware that $533,000 in prize money is up for grabs over the two days.

Pause and think about those six figures for a moment – amazing isn’t it as this is provincial Rockhampton?

Did you know that the total prize money pool for the CYS 2YO Plate could reach $151,500 should it be won by a youngster which qualifies for the conditions?

Also are you aware the CYS 2YO Plate is the richest race run in Queensland on Saturday?

Now that’s quite a feather in the cap for the Rockhampton Jockey Club.

Now listen to this, all told those seven have ridden 8209 winners between them.

Interestingly, Brad Stewart who rarely rides outside SEQ these days, is flying north for just the one ride the Jamie McConachy trained Tycoon Fury (TAB 3) in R1 on Friday.

If that’s not a tip in itself well nothing is!

Take it a step further, correct me if I am wrong (I am sure you will) the last time the gifted Stewart rode at Callaghan Park was on November 22, 2020 when he landed a treble of winners.

One of those was Lastofthe Mohicans for Jamie McConachy and another Halcyon Days for his father the trainer Neville Stewart.

Racing commences on Friday at 12.37Pm and after the races remember the Calcutta on the 2YO Classic at the Red Lion Hotel kicking off around 6pm.

Saturday’s races have a later start at 1.42pm with a bumper crown expected for the glamour feature races while entertainment and food and beverage packages have been well supported.

The duo of CYS related races look lotteries with 31 runners in total which have won 39 races between them.

They are arriving from all over the place so your guess is as good as mine!

Of course, for discerning buyers and those in the potential category, inspections will be available of the yearlings at the Robert Schwarten Pavilion on both days.

Don’t forget the welcome complimentary BBQ at the sales venue from 6pm on Saturday with a parade of selected yearlings as well,

Then the big sale commences at 11am sharp.

I’m tired already from just writing about it but then again there is one more sleep – winning dreams.