Our Boy Malachi a Racetrack Sensation 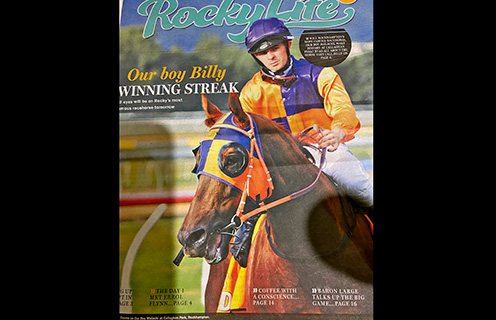 Putting it concisely, Bert Lillye (1919-1996) the Hall of Fame Australian Racing Writer who had no peer, decreed “behind every stable door there is at least one good story’’. In the case of Our Boy Malachi the back-to-back race winner of the Rockhampton Newmarket Handicap (2013-2014) there are a multitude of stories.

Bred and named by the late passionate Rockhampton racing and family man Col Donovan, striking chestnut Our Boy Malachi (18/11/2008 ch g Top Echelon-Rusticate) was a racetrack sensation. However, it didn’t start off that way when on debut at Mackay on May 17, 2011 he finished 4 lengths second behind Clint Garland trained You Done It Again. Stable named “Billy”, he would go on to win his next 12 starts consecutively at Gympie (1), Rockhampton (8), Mackay (2) and Eagle Farm (1). That sequence which included his first Rocky Newmarket triumph on June 20, 2013 ended with a rare blemish at Doomben on May 10 the next year when a close 2.9L 5th/12 behind Pure Perfection. Billy kicked back in almost immediately winning at Mackay a fortnight later before slamming his second home-town Newmarket win with 59kg under Adrian Coome on June 19.

Tagged “The Rockhampton Rocket”, indeed a mighty honour in an analogy to the original, the Rockhampton born tennis ace Rod Laver (b 1938) who won two Grand Slams and 200 tournaments and to this day is widely regarded as one of the greatest players to ever walk onto a court. Just like Rod Laver, our Rockhampton Rocket had no choice but to leave his humble Callaghan Park abode and his brilliant coaching mentor John O’Sing (12) for the lofty heights of Sydney and the swankier stables of Team Hawkes at Rosehill.

Our Boy Malachi took it all in his mighty stride winning his first four starts in the Harbour City with two apiece at Rosehill and Randwick. GROUP 1 placed Our Boy Malachi suffered the first of two bleeding attacks in subsequent campaigns before serving up two more top class races wins including the Expressway Stakes (1200m) first-up from a 252 days break on January 30, 2016 at Rosehill.

Fittingly, Billy demonstrated his rare talent in Melbourne during the Cup Carnival in November 2016 by winning a $120,000 Open (1000m) at Caulfield. The Rockhampton Rocket would never race again as he was found to have bled from both nostrils post-race. In many ways it was a tragic end to an all too short but illustrious racing career embracing just 27 starts for 19 wins and three placings earning $946,400 thereby setting a Rockhampton record.

Branded a “fighter and a winner on the racetrack”, Our Boy Malachi demonstrated those attributes from day one as a foal when his mum Rusticate died soon after his birth. Billy the foal was reared on a bottle (mare milk) during his first weeks of life only to be toasted with the finest champagne in his later life as his racetrack glories escalated. At the height of his career in January 2015 his breeder, managing owner and proudest fan and RJC committeeman Col Donovan passed away from a rare brain disorder.

Col’s brother, Townsville racing man Ross then proudly managed the ownership group which also comprised Col’s wife Katrina and daughter Jess. Named after Col’s son Malachi, there is irony in the fact that his regular jockey early days and now a trainer as well, Adrian Coome won both Rocky Newmarket’s on Our Boy Malachi as well as another 10 races.

On Friday, Adrian will saddle his first Rocky Newmarket starter as a trainer in Plenty who many think can win. Meanwhile, about 720km north in Townsville in Ross Donovan’s paddock, “Billy” living the life of Riley will be blissfully oblivious of the glorious memories which will flash through the minds of Adrian Coome, John O’Sing and the Donovan’s when the barriers rise for the Rockhampton Newmarket of 2022.

For the record and his connections’ bragging rights, Our Boy Malachi is the only horse to win two Rockhampton Newmarket’s let alone in succession since the grass track was opened at Callaghan Park in 1984. First run on the dirt/sand in 1918, Lady Bob (1918-19), Cabin Inn (1956-57) and Reggie (1965-66) are the only other consecutive winners. Long live Billy as for sure his memories always will.