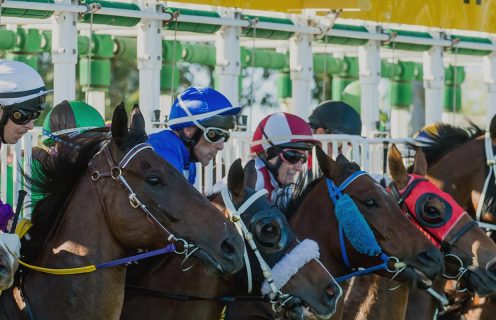 In the days of old – well actually not so long ago when bookmakers twirled the knobs setting the prices, racegoers always shopped for and were assured of good value.

Those racegoers or just simply racing aficionados (I had to look that word up as well – it means devotees) are likely to acquire some real bargains at Callaghan Park racecourse on Thursday evening.

The occasion commencing at 6pm will be the presentation awards ceremony for winners of various categories of Rockhampton’s 2020-21 racing season.

It is expected all winners will be in attendance with of course the exception being Mystery Element which would struggle to make it up the stairs to The Members lounge where the function will be held.

Back to those likely bargains which come in the form of some unique items of racing memorabilia which would attract national interest – that is if the function was occurring in a metropolitan racing precinct.

Such as Melbourne Cup winning jockey Craig Williams’ autographed silks – well actually jodhpurs worn by the champion jockey when he won the 2019 Melbourne Cup on Vow and Declare.

Then there is the set worn and autographed by Kerrin McEvoy and rival jockeys who competed in the inaugural running of Australia’s richest race the $13M The Everest at Randwick in 2017.

Kerrin wore them aboard Redzel the winner that year and they won it again in 2018.

Both sets (Williams/McEvoy) of jodhpurs which in racing lingo come under the umbrella of silks, would be treasured acquisitions for serious racing memorabilia collectors so who knows just what they will fetch.

However, given that they are up for grabs in Rocky they might go under the radar and be bargain buys.

Other items include a set of silks worn and autographed by high profile New Zealand jockey the now Victorian based Michael Walker.

As well there is the rug won by the champion sprinter Buffering in the 2015 Moir Stakes in Melbourne.

Among the other array of items are signed winning photos of grand sprinter Bivouac as well as autographed caps from Godolphin.

That’s just an appetiser of what’s up for auction.

Rugby League football fans are catered for as well with signed Bronco’s and Titan’s jerseys also going under the hammer.

Be warned though racecourse rumour has it that ardent Bronco’s fans Wally Welburn and Mark Unwin are expected to get involved in a fierce bidding dual to acquire that jersey.

Both are expected to dust the cobwebs out of their wallets for the occasion with all proceeds from the auction assisting local trainer Craig Russell and his family after his recent life changing surgery.

Just in case things get out of hand among the pair, the RJC’s operation manager Kelly Suli said with tongue in cheek “security will be present”.

The auction will be conducted by Russell Leonard and canapés will be available and a cash bar will be in operation.