RJC Gallops Back into Action on Tuesday After Big Carnival 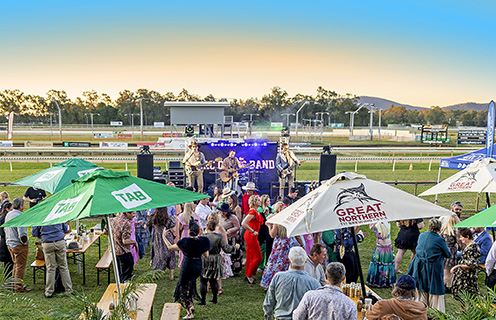 Hot on the heels of its highly successful Winter Racing Carnival, the Rockhampton Jockey Club gallops back into action at Callaghan Park racecourse on Tuesday with an extended eight race TAB program

Originally as Racing Queensland’s policy determines, only seven races were drawn up for Tuesday’s card but that was blown out to eight when 17 youngsters accepted for the QTIS 2YO Maiden (1100m).

Rightly so after such a response, especially with the 2YO season ending in a fortnight, the common-sense decision meant another $40K is there to be shared by racing stakeholders.

From a local perspective the most interesting of the juvenile’s competing will be the Tom Smith   trained Heroic Knight (R 2-TAB 2) in the first division run at 12.57pm.

The chestnut gelded son of Heroic Valour and English Summer, topped the sales at the 2021 Capricornia Yearling Sale in Rockhampton being knocked down to Tony Fenlon for $67,500.

Also among the owners are Ray Fenlon and RJC chairman Robbie Carr.

The connections have been patient with Heroic Knight which has been placed in two trials at Callaghan Park.

No doubt the performance of Heroic Knight will be a strong pointer towards the prospects of Roma trainer Craig Smith’s Savvy Song (TAB 3) in the second 2YO Maiden (R 3) at 1.34pm.

That’s because the Your Song gelding Savvy Song beat Heroic Knight by 5.5 lengths when winning a barrier trial over 900 metres at Callaghan Park on June 27.

Although the time was moderate the manner by which Savvy Song won was nothing short of ultra-impressive.

A repetition of that effort would suggest that Savvy Song looms as the one to beat in Tuesday’s field where the majority of the form disclosed by rivals in races and trials looks modest.

Rockhampton based jockey Natalea Summers will be having her first Callaghan Park race ride since last November when she handles Money Talks in the Maiden (1050m) on Tuesday.

Natalea had been off the riding scene since last December and underwent surgery in the ensuing months for a niggling injury.

Money Talks is backing-up quickly after failing for Natalea over 1300 metres at Mackay last Thursday when she was having her first ride back.

Summers made up for that disappointment and the late scratching that same day of her mount Aspen Lad by winning on Mark Hassam’s Daunting Princess at Thangool races last Saturday.

Capricornia country racing hots up in the coming weeks with Emerald racing this Saturday, followed by Middlemount Cup races on July 30 and Yeppoon the next Saturday, August 6.

The Gladstone Cup race program is featured on Saturday, August 13.