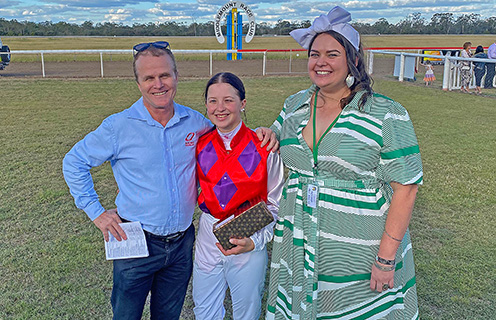 Rockhampton racing stakeholders were dominant at Saturday’s annual Middlemount Race Club meeting with the jockeys winning all races and Callaghan Park trainers four events. Teenage Rockhampton apprentice Brooke Johnson 19, continued her dream start as a jockey with another winning double at the bumper race meeting last Saturday. Brooke was named the leading Middlemount Race Club jockey at the annual Cup meeting after riding two winners and as many placegetters on the five-race card.

It was the “icing on the cake” for the personable young lady who has now ridden five winners in just three weekends of race riding. At her debut outing at Thangool on July 10, Brooke made a dream start scoring nine lengths win on her master Benny Crear’s trained Grand de Lago. Second-up at Emerald seven days later it got even better for Brooke as she rode a winning double on Imadgic and Attackabeel for premier Rockhampton trainer Clinton Taylor.

“After one win on my first day and then two on my second, it would be great to make it three wins on my third day of race riding”, she said gleefully. Coming towards the home turn in the Cup, Brooke’s chances of that occurring looked strong when Grand de Lago held a commanding lead. However, old timer and the now 9-Y-0 Barachiel (Tasha Chambers, $2.80) played dream buster by charging past Grand de Lago at the 250 metres and relegating Brooke’s mount to second.

However, it was still a win situation for Brooke as the two points she earned for second placing was sufficient to win her title of leading jockey on nine points over Mark Barnham with eight.

“This is just so good”, Brooke said after being presented with her prize. The occasion was made all the more special as Racing Queensland’s Industry Educator Jeff McKay was in attendance where he was tutoring Brooke and other apprentices.

“That is very special for Brooke. She is doing everything so well and looks likely to make a real impact and should go a long way. She is a natural lightweight and that is a huge help”, a genuinely delighted McKay commented. Senior Rockhampton jockey Tash Chambers ticked off a bucket list achievement at her first day of riding on the spacious 1600 metres Middlemount dirt track. Tash won on Glenda Bell trained Schweid as ($3.00) in the BM 65 (1000m) before her memorable Cup win.

“It certainly was a great day with the track in great order. The club went above and beyond to take care of the racing participants”, Tash said. Chambers has ridden extensively particularly throughout Queensland while riding as well at Darwin and in New south Wales.

“You name it and I’ve probably ridden there in Queensland”, she said downplaying that in fact she has ridden at an amazing 71 different racetracks mainly in remote areas as well as in the city centres.

Established in the eighties Middlemount is one of Queensland newest race clubs and winning Rocky trainer Alan Jones reminisced as he led in Saturday’s Cl B victor Cinderella Man (Barnham, $6.00). “Love coming out here. I won a double at their first meeting way back well over 30 years ago”, Jones said.

Stand-in trainer Benny Crear reckoned the owners of Maiden Plate (1200m) winner Money Travels should be presented with an award for patience. “Very patient owners”, Benny said with tongue in cheek after Money Travels broke his Maiden status at start number 46 while lifting his previous prizemoney haul of $56K appreciably.