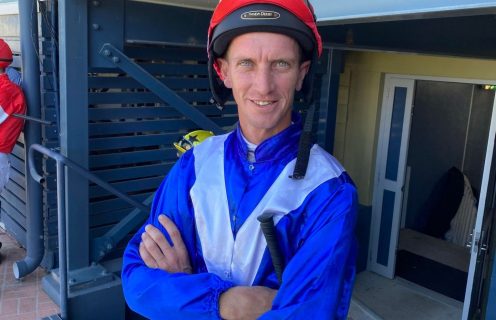 Spry 37, has a full book of five rides at the Rockhampton Jockey Club TAB card.

Spry’s first venture back to Rockhampton where he was once temporality based took place on December 4 last year where he and Coome had a field day with three winners.

He has since made three more excursions to ride there – on December 13 and 20 and most recently on January 27 where success has eluded him.

However, in all fairness Carl’s complement of rides on Saturday is of similar calibre to those when he landed the winning treble there almost three months ago,

In a remarkable career which quite possibly could be unprecedented in Australia, Spry has ridden on no fewer than 108 different racecourses with winners bobbing up here, there and everywhere.

By no means boastful and blessed with an astute racing and business mind, Carl let it slip when I interviewed him on Thursday that he has ridden winners all over Australia.

Pressed to explain he answered “I have ridden winners in every State and Territory throughout Australia and that includes the ACT”, he said matter of factly.

After scribing racing for 52 years, I thought I had heard it all but this was a first so I prodded a little further.

While not making any aspersions whatsoever about Carl’s character (I know him personally to be very honourable), over all those years many jockey scallywags have tried to take me for a ride, so it has become second nature to check the facts.

What about Tasmania, I asked Carl thinking he may not have included the Apple Isle in his exploits?

“Yes, ridden and won in Tasmania as well”, Carl chuckled and so true he was as I later researched and discovered he had indeed won two races at Hobart and four in Launceston.

So, I dug deeper into the bowels of racing records which confirmed that Carl Spry was true to his word.

Not forgetting of course Tassie!

“I just started travelling (around 2008) and took my riding gear with me and rode before settling in Darwin for four years around 2016”, Carl said.

Aided immeasurably by his partner Sarah Acornley, the couple enjoyed outstanding success with Carl riding 129 winners at Fannie Bay well up on his earlier career wins of 89 at Brisbane metropolitan tracks.

Gayndah born, the son of a trainer Winston (Whippy) and wife Faye Spry of Sir Tatt notoriety and brother of Peter Spry who rode the program of winners there in 1986, Carl has well and truly been around.

So much so he can lay claims to being the jockeying version of Lucky Starr’s popular 1962 rendition of the song of “I’ve been Everywhere (Man)”.

On facts that catchy tune in which Starr rattles off in spitfire fashion the names of 93 Australian towns comes second to Carl Spry’s 107.

Carl and Sarah and their children moved to Townsville in 2020 where they train and operate out of the very appropriately named Journeyman Lodge Racing Stables.

This they did for family reasons and not surprisingly those winners are ticking over at Cluden racecourse.

So, from between 2.47Pm and 5.22PM at Callaghan Park on Saturday there is every likelihood that Carl Spry will build on his tally of 585 race winners.

That readers is an essay of not letting the truth spoil a very factual story – thanks Carl Spry.