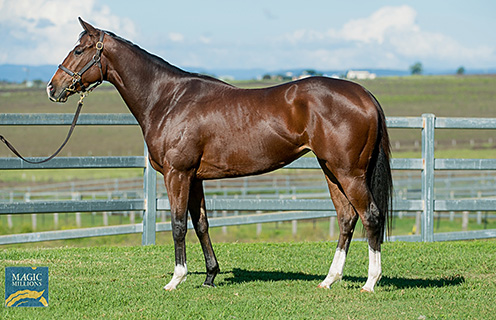 Exceptionally talented Rockhampton filly Sweet Dolly was sold for $320,000 late on Tuesday afternoon at the Magic Millions National Broodmare and Thoroughbred Sale at the Gold Coast.

Raced by the Capricorn Coast’s Michelle and Ken Walker, the sale represents a magnificent return for the owners who purchased her for $1500 as weanling at the same venue.

Together with prize money that accumulated to a tick over $480K it equates to approximately a $800,000 windfall for the Walkers less jockey and trainer’s percentages and associated fees.

Sweet Dolly’s spectacular albeit brief racing career of just five starts for four wins and a third was cut short when she was prematurely retired in April after the reoccurrence of a leg related injury.

She burst on to the racing scene brilliantly at Townsville on November 28, 2020 followed by similar successes at Eagle Farm and the Sunshine Coast.

The Eagle Farm win in the LR (Black Type) Calaway Gal 2YO Stakes (1000m) on December 12, 2020 set Sweet Dolly up as being highly sought-after racing filly with a stud career ensured.

Sweet Dolly’s reputation grew in stature after winning the rich The Jewel at the Gold Coast in March, 2021.

Subsequently she developed the leg problem and given a long layoff and intense rehabilitation she raised alarm bells in a shock defeat for third on comeback at Mackay on February 26 .

After two subsequent unflattering barrier trial wins in Rockhampton in March and April, the injury scares reappeared and the wise decision was made to retire her and place on the auction market.

Her regular guardian and trainer Kevin Hansen and the Walkers made the necessary call-in recognition that the welfare of their filly was first and foremost.

Jan is a member of a Queensland racing and thoroughbred breeding dynasty and she achieved her own notoriety by breeding 2016 Golden Slipper Stakes winner Capitalist.

Not only that, Jan bred his sire the outstanding racehorse and subsequent champion stallion Written Tycoon.

Clark bred Capitalist as a result of a mating with her mare Kitalpha.

The irony is that Jan Clark purchased Kitalpha at the very same sale as that of Sweet Dolly when she outlaid $82K for the Fusaichi Pegasus mare in 2012.

The Walkers and Kevin Hansen can be assured that Sweet Dolly has gone to the best of homes.

The Sidereus mare emanated from the Capricornia Yearling Sales as a $17K buy but went on to win just over $270,000 in stakes.

The Rockhampton Jockey Club has a classy eight race TAB card planned for Friday with the early starting time of 10.50pm and an early finish of 2.55pm.