That’s a WRAP The Archer – article by Tony McMahon 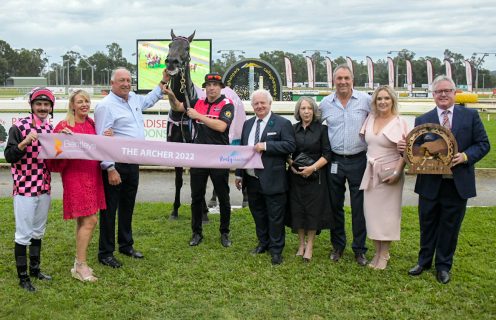 Rockhampton racing rocketed to unparalleled heights on the crest of the inaugural running of Saturday’s $652K The Archer race day, the richest ever run in the city since horse racing commenced in 1868.

Pillared by regional Queensland’s wealthiest race the $440,000 The Archer (1300m), the occasion did not disappoint the 3000 Callaghan Park patrons, the biggest attendance in over 30 years.

Parochial Rockyites were feted to a dream home town result in The Archer, when Ashley Butler 30 the only local jockey represented rode the race of his life to snatch victory on Emerald Kingdom in the last stride.

Punters and racegoers lined the winning enclosure vantage points and the packed grandstand to cheer Butler as he trotted Emerald Kingdom back to an emotive winners’ reception.

There to greet him were Emerald Kingdom’s The Archer slot holders, Rockhampton’s Rob and Leonie Carr, trainer Heathcote and his wife Vicky who owns Emerald Kingdom.

As if scripted, The Archer produced a blanket finish with fourth placed Annabel Neasham’s Holyfield and fifth home Kris Lees’ Gemsong both within 1.1 lengths of the winner.

First prize for The Archer was $275K which was expected to be split 50/50 between the slot holders the Carr’s (slot cost $35K) and owner Vicky Heathcote with a similar arrangement for placegetters down to tenth.

Trainer Heathcote had gone on record in his preview thoughts about Emerald Kingdom’s big race prospects, that Ash Butler was the go-to man for the occasion.

“This is just brilliant. I am so happy naturally for my wife and of course the Carr’s and Ash. Look this race (The Archer) put on by the Rocky Amateurs is really something special for racing. It is huge for Rockhampton and you only have to see the sea of people here on course to feel that”, he said.

Man of the moment Ashley Butler, quick witted at the best of times when asked to express his feelings on winning The Archer replied “it sure beats winning the Newmarket”.

He was referring to his previous biggest feature win at Callaghan Park on Only Chance in the Rockhampton Newmarket (1300m) last July.

It was a memorable day for Rob Heathcote as well as he revelled in double celebrations after winning the Gold Coast Guineas with Prince Of Boom two hours earlier on Saturday.

Co-trainer, Sydney’s Adrian Bott’s appearance at Callaghan Park with third placed Dawn Passage was also a feather in the cap for Rockhampton racing.

Bott had bypassed the $1.815M race meeting at Gosford where the stable won with Resonator as well as Morphettville (SA) on Saturday where the Waterhouse/Bott stable won the Port Adelaide Cup with Splendiferous.

Unquestionably the Rocky Amateurs committee reached for the stars with the first running of The Archer and the results shone through brilliantly.