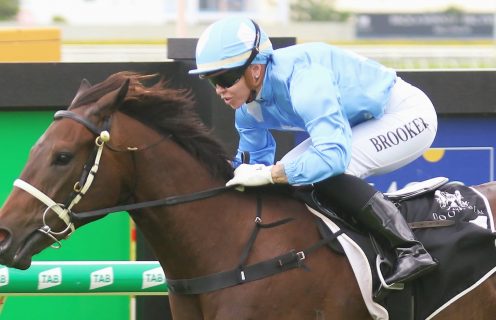 Button was front and centre with a large contingent of Central Queensland owners when nippy gelding Jemeldi scored an emphatic 2.25 lengths win in the QTIS 2YO Handicap (110m).

It was Jemeldi’s second win from as many starts and the Winning Rupert-Schipper x Exclusive Quality gelding has more than cleared the slate of his $50K purchase price at Magic Millions in January last year.

The two wins have earned connections $52,700 in stakes.

Button is the managing owner of the large syndicate which includes John Kele, Shirley Watts, Bev Gibbs, Carol and Barry Ryan, Grant Collins and members of the Livanadream syndicate.

The trainer, with stables located at both the Sunshine Coast and Townsville makes no secret that he has a high opinion of Jemeldi.

“He is a real fighter and the way he fought on and went on to win so well after being pressured earlier in the race was to his credit”, Button said.

Tom Button is building a huge reputation for his finesse not only with training two-year-olds but also for selecting them as yearlings at sales at the Gold Coast and Rockhampton.

Furthermore, the Button trained Flying Crackerjack now retired finished a fighting second in the CYS 3 & YO Classic (1300m) in 2021.

While the majority of his purchases are QTIS registered ensuring they reap lucrative prizemoney bonuses if they win or place, Jemeldi is not.

“Unfortunately, he is not QTIS”, Button said while acknowledging that logo does not automatically guarantee results.

Button explained recently that he has stables established at the Sunshine Coast and Townsville from where his youngsters can target QTIS and 2YO races anywhere within about a five hours radius.

“I see it as ideal as from those stables I can cover most of Queensland’s QTIS races within about a five hours float ride’’, he said.

He proved the theory correct at the Bowen TAB races last Monday when Kamarcher made a 2.5 hours float trip down from Townsville to contest the QTIS 3YO Maiden (1200m).

The Button stable has been enjoying a very successful campaign presently with its Capricornia Yearling Sale graduate The Tax Accountant the winner of his past two outings at Townsville.

The trainer is expected to play a major role at the Capricornia Yearling Sales Carnival at Callaghan Park in April with two days of first-class racing.

The Capricornia Yearling Sales follows on Sunday, April 10 at the Robert Schwarten Pavilion at the Rockhampton Showgrounds where for certain Button will be an active buyer.

Over 100 nominations of yearlings are being collated and catalogued for sale.