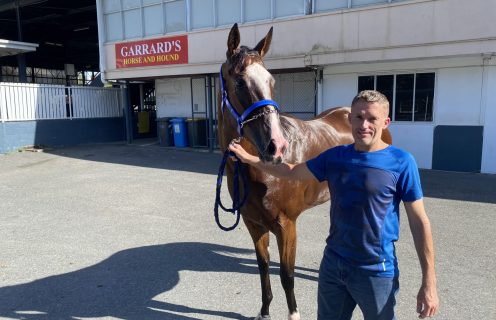 The idiom “all good things must come to an end” must sit uncomfortably with the connections of outstanding Rockhampton 3YO filly Sweet Dolly who’s racing career has abruptly ended.

Her Rockhampton trainer Kevin Hansen and managing owner Michelle Walker made that tough call to terminate that segment of Dolly’s career after she won a barrier trial here on Monday.

Sweet Dolly in uncustomary fashion won the 900 metres trial unconvincingly by a bare margin and Hansen was immediately concerned.

‘’It was apparent there was an issue as she never let down in the straight like she used to”, he said.

Boy of boy could the flying filly letdown as demonstrated in her first three starts winning consecutively at Townsville, Eagle Farm and the Sunshine Coast in the summer of late 2020 and early 2021.

Sold for a song at $1500 as a weanling, the Real Saga filly became the Cinderella Princess of Queensland racing after a dominant win in the $500K 2YO Gold Coast Jewel (1200m) in March 2021.

Potential buyers had been circling for months but managing owner Michelle Walker was resolute that the prize filly with almost $450K prize money beside her name was not for sale.

Even now Michelle has no regrets as the exuberance that Sweet Dolly provided for her and husband Ken who was enduring the early stages of dementia was priceless.

Sadly, soon after Sweet Dolly’s career crowning win in the Jewel, she succumbed to a suspensory ligament injury which required surgery and a long and regimented rehabilitation process.

This was undertaken at first for months on end at Kevin Hansen’s North Rockhampton stables where he put his own career on hold by concentrating wholly on Sweet Dolly.

“We certainly did our best for a successful outcome for her but in the end her welfare come’s first”, he said on Wednesday when announcing her retirement.

This came about subsequent to Dolly’s trial on Monday when a veterinary scan revealed a similar injury in the same leg, the off fore near the sesamoid had flared up.

In the early stages of her return to the track Kevin Hansen was buoyed by Sweet Dolly’s training efforts but some concern was flagged at her weakening third first up at Mackay on February 26.

That run some 50 weeks after her Gold Coast triumph was to be the last time she would race.

“I blamed the shocking heat that day’’, Kevin Hansen said at the time.

However, as he cautiously progressed with Sweet Dolly’s preparation, Kevin became a little more concerned.

“I just thought something was not just quite right. There was no soreness or anything but she just didn’t seem to be her old self”, he said.

Kevin’s gut feeling was vindicated as events turned out.

Soon the next chapter in Sweet Dolly’s life will unfold when she is sold at the Gold Coast on May 24 at the Magic Millions Winter Broodmare Sale where she should bring a substantial amount.

Sweet Dolly leaves the racetrack with a record of four wins and a third ($448,950) from just fives starts in a career that was enshrined through sheer brilliance and encased with superlatives.